Hot News A certain door in Call of Duty: Warzone is murdering players 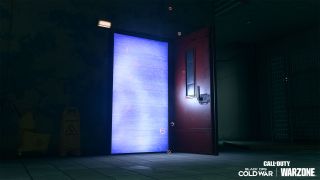 A Call of Duty: Warzone player on Reddit has found a bug where a certain door in the salt mining facility instantly kills you when you touch it. Other players have also experienced the wrath of the murder door.

The video (embedded below) reminds me of learning to fake out hitting your head on a wall in drama class—the player charges towards the closed door headfirst, before staggering off it. Except, instead of having discreetly shielded the blow with their arm, they’re now dying on the floor and in need of revival. (So like if you messed up that maneuvre, in drama class.)

Nobody in the Reddit thread is quite sure why this is happening. There are suggestions that it might be something to do with how the door used to be open, not closed, in a previous update, or that it might have something to do with ‘red doors’—doors used to instant travel across the map. The suggested idea was that if there was a red door elsewhere in the room, normal doors might not be meant to be usable. Those doors outright murdering you for trying still seems a bit harsh, however.

Doors are a bit of a developer’s nightmare, affecting a surprising number of virtual states for something so simple in real life. Line of sight, AI walking paths, bullet paths… you’ll notice if they go through a closed door (or don’t go through an open one). It makes them difficult to program, and all the more difficult if a bug makes something happen like every single door in the game opening at once, as happened at one point during The Witcher 3’s development.

So doors are both easy to bug, and in a live service game like Warzone that frequently updates, bugs are easy to implement. Perhaps a door that tries to murder its players—rather than just deeply stressing out its developers—was inevitable.

It’s hardly the first strange thing to happen in Warzone: Bugs such as invisible helicopters and holes in the map have been well-documented in the past.