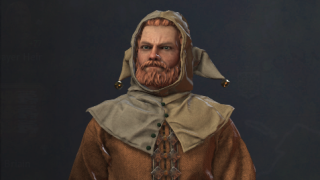 Crusader Kings 3 has a small update coming this week, currently in open beta on Steam, and set to release on June 22nd barring any major bugs, that fixes some problems with the foremost medieval sim’s big 1.4 patch. That patch released on June 8th, with some pretty good stuff going on like new haircuts and hats, as well as some game mechanics changes or whatever like dynamic garrisons.

About those hats, though: There was a Jester’s Hat. Too many people were wearing that hat. I saw, like, a whole family wearing that hat at the same time the other day. The jester’s hat has been nerfed: “Jester hat will be less fashionable after 1300 and thus, won’t used by the majority of the characters anymore.”

Elaborate simulation games always get the best patch notes, and while Dwarf Fortress is an all-time champion the Crusader Kings games have, over the years, really given DF a run for its money. Crusader Kings 3 is no different.

Damn ghost children, always trying to show up when I’m meeting my Peers. You can read the full 1.4.2 beta patch notes on the Crusader Kings 3 Forums.

For more funny patch notes, you should go check out the roundup from March’s 1.3 patch, which is one of the best so far for hilariously-worded updates.