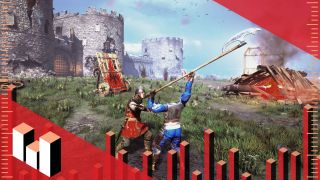 Chivalry 2 is brutal, not only because of all the dismemberment going on, but also in how taxing it can be on your PC. Should you feel the need to whack all the graphic settings to full, it can feel like a lost battle with some older PC configurations. But there is yet hope.

After having been previously delayed, you’re probably raring to get stuck into some bloodthirsty, multiplayer, hack-and-slash action in the long-awaited sequel to Chivalry: Medieval Warfare, from Torn Banner Studios. But before you do, it might be worth taking some time to do a little graphics tweaking. That way your PC might have a chance as you charge your way through enemy lines, lopping off limbs without remorse.

Due to the lack of in-game benchmark, I’ve been caught in a Sisyphean death loop in order to check each graphic preset and individual setting as accurately as possible. As such, I’ve re-played the same intro to the single player, offline battle mode ‘The Siege of Rudhelm’ roughly a hundred times, all so you can get a better idea of what settings will impact your frame rates the most, and where you can afford to preserve some beautification.

It’s worth keeping in mind that this may not be as wholly representative of the game as I’d have liked. Thanks to the AI’s general ineptitude, and inability to perform simple tasks like pushing a siege tower, it was difficult to get an entirely comparable run every time.

Still, between watching my teammates wander aimlessly through fire pits, poking people with my polearm until their heads fell off, and gawking at the random floating swords and enemies dotted around, I managed to get a few good, long runs out of it. By averaging these out for each graphic preset and individual setting we’ve hit an even read in the end.

First, to get an idea of the kind of machine that can handle the game on epic settings (with V-Sync disabled) I benchmarked Chivalry 2 on each one of our performance testing rigs, as well as some MSI gaming laptops. Each is representative of a certain standard: budget, mid-range, or high-end, and we wanted to see how they fared when faced with 1080p, 1440p, and 4K resolutions.

Starting off with the MSI gaming laptops, tested at their native 1080p, the high-end MSI Raider GE76’s Intel Core i7 10750H and Nvidia GeForce RTX 3070 combo pushed out an 88 fps average, with a 65 fps 1% low. That’s a passable score, and there was no obvious frame drop to speak of.

Our MSI Raider GS66, complete with Intel Core i7 10750H and Nvidia GeForce GTX 1660 Ti, gave up a just passable 58 fps average, with 1% lows of 44 fps. Not a sterling result, but that’s to be expected from a rather mid-range mobile GPU inside a laptop in balanced mode.

Later I’ll talk through some ways you can boost if you’re getting numbers like these, but just know these scores will be higher for desktops sporting similar hardware configurations.

Moving on to the gaming PCs and our top dog—powered by an MSI RTX 3080 Gaming X Trio and AMD Ryzen 9 5900X—aced every resolution without breaking a sweat. With a flagship configuration like this one, you’re going to rip through those frames like a knight wielding a big ol’ war axe.

Then there’s the mid-range machine’s RTX 3060 Ti Ventus 2x and AMD Ryzen 5 5600X combo, which gave no issue running the game on epic preset at any resolution. An average of 82 fps at 4K is certainly commendable.

Our budget build, powered by an MSI GeForce GTX 1650 Super Gaming X and Intel Core i5 10400F, managed similar frame rates at 1080p. At higher resolutions, though, it did have a little bit of a struggle—it ended up unplayable at 4K, only able to pump out 29 fps on average, with 1% lows of 24 fps. It struggled a lot even at 1440p, and that was with minimal bloodshed, so I’d hate to think how it would fare in a multiplayer arena.

Of course dropping down to 1080p is always an option, but it doesn’t quite do the game justice, especially if you’re scaling it up on a 4K screen. The likelihood is you won’t be using a 4K monitor with a budget machine, anyway, but if you are there are some nifty tricks to improve those scores.

Chivalry 2 has several preset graphic settings to play around with, so I’ve tested each one on our mid-range rig at 1440p with the resolution scale set to 100. There’s not a lot of difference between medium and low presets, but a pretty big jump when you move from epic to high. There’s not a massive sacrifice in terms of visual fidelity between the two, either.

If you’re looking to retain as much as beautification as possible, however, there is a better option than turning the graphics down, should you be packing a 4K monitor.