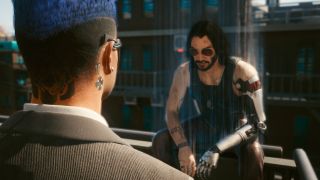 I for one will miss the grenade corpses.

The only change that feels like it might make a substantial difference to the moment-to-moment experience (unless you were hitting any of the fatal quest bugs, of course), is optimisation that should produce “fewer instances of NPCs with identical appearances spawning in the same area, and to improved streaming.”

The patch arrives hot on the heels of the game switching director, while CDPR’s president and joint CEO Adam Kiciński also recently re-iterated CDPR’s commitment to Cyberpunk: “We intend to live up to what we promised our gamers in January. While we already see major improvements, a large part of the team continues to work on making sure that Cyberpunk provides even better entertainment to gamers.”

Just how realistic it is to expect ‘better entertainment’ from Cyberpunk 2077 is the elephant in the room, however. Each patch comes with voluminous notes and fixes an absolute tonne of bugs and performance issues, but under each announcement and on the CDPR forums you’ll see players asking in vain for more substantial changes: improved NPC AI across the many different varieties, more interactive elements in the world, the ‘opening up’ of closed stores and other buildings.

It’s all stuff that, at this moment in time, seems like a bit of a pipe dream, and it’s highly questionable whether Cyberpunk 2077 will ever be a fundamentally different experience from what it is now. While there have been plenty of issues on PC, it’s nothing next to the absolute technical disaster perpetrated on our console cousins (and it doesn’t help CDPR itself took the mick out of how buggy the game was pre-release).

It feels like there’s still a problem of expectations with Cyberpunk 2077: that, somehow, CDPR can still ‘fix’ it, and maybe all that hope and hype over so long will eventually prove worth it. The studio certainly has the resource to pull a No Man’s Sky. The question is whether it would be better for us all if CDPR just fixed all the bugs, and moved on.