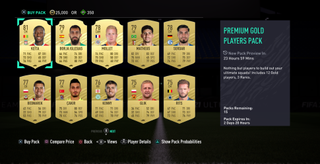 For at least a short time, Electronic Arts will let players in FIFA Ultimate Team look inside a loot box before they buy it. The new Preview Packs can be “opened” before they’re bought, allowing players to see the opening animation and check out the contents before proceeding to purchase the pack with either freely-earned FUT Coins or real-money-purchased FIFA Points.

It increasingly seemed like EA would be the last big company to move away from the loot box model, which has come under increasing scrutiny in the past few years for its addictive nature and similarity to gambling. FIFA Ultimate Team loot boxes are a huge part of EA’s revenue stream, as was shown in a set of leaked documents earlier this year.

The new Preview Packs can be bought once opened, or ignored. After a timer expires the pack will disappear and a new one will take its place (the example in EA’s posting shows a timer of 20 hours and 35 minutes, so an educated guess might be a 24 hour timer between pack previews). Opened “time limited” and “limited quantity” packs will also become unavailable if the time limit, or the quantity of limited packs, runs out before your preview timer is up.

The Preview Packs will be the only ones available to purchase for a while, until the Festival of FUTball event ends on July 16, 2021. Other kinds of packs, those not obtained from the FUT store including Objective, SBC, or Division Rivals reward packs, will not change. You can read more about the time-limited Preview Packs on the FIFA Ultimate Team website.

There’s no real question that these packs are a test brought about due to widespread concerns, especially among European regulators, that loot boxes are gambling. EA was facing fines of up to €10 million in the Netherlands last year for violating local gambling laws. A lawsuit in Canada against EA alleges that it ran an “unlicensed, illegal gaming system.” Finally, last year, the UK House of Lords recommended that loot boxes be classified and regulated as gambling. Researchers into addiction have said in the past that there is a clear connection between loot boxes and gambling addiction, calling it a matter of “life or death” for problem gamblers.