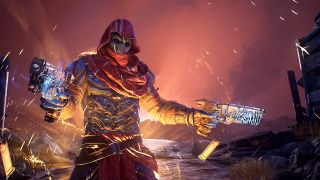 Developer People Can Fly has announced that the next patch for Outriders, currently being tested and due to launch next week, will make major changes to the game’s loot system and Legendary drops. Since launch, players have complained about how these endgame weapons and items are doled out, and not just the drop rate, but the various ‘gates’ placed around acquiring specific types.

Well, People Can Fly’s doing something about it. Better late than never. Legendary drop rates are going to be increased by 100% across the board, while the previous ‘level brackets’ will be removed, meaning the items will begin to drop when defeating an enemy of any level (though the base scaling will still apply).

Additionally, the game will introduce an anti-duplication system (getting multiple drops of the same Legendary was a frequent complaint) that will mean any duplicate items are re-rolled once. “Note that this system does not guarantee that every drop will be unique,” the developer clarifies. “Rather, it is designed to provide a second roll at avoiding a duplicate.”

There are also changes to what bosses will drop, and the luck system in general has been improved so “players should no longer experience very long droughts without a Legendary item dropped during endgame.”

Finally, Outriders recently issued players with an ‘appreciation pack’, and the rollout went a little awry. “We’re sorry that many of you received a weapon you already previously had obtained. This was not our intention,” People Can Fly states. The developer is re-working the package and will re-grant it to players who’ve claimed it since it was released. Such a hitch is at least relatively minor, unlike the horrible bug that started wiping out players’ entire inventories back in April.

There are a bunch of other bug fixes and minor gameplay tweaks in the full notes, but the biggest change here is undoubtedly that change to Legendaries: an 100% increase in the drop rate suggests an acceptance that something was wrong indeed. Whether this helps Outriders stay interesting in the long-term, however, remains to be seen.