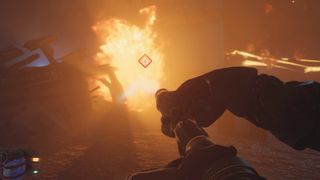 There sure have been a lot of recent reminders of how terrible the Chernobyl disaster of 1986 was. I didn’t really grasp the magnitude of the event until I watched HBO’s Chernobyl show in 2019. The early episodes were vivid depictions of the brutal conditions people faced in the first hours of the meltdown. Watching ill-equipped rescue workers jump headfirst into a radioactive hellscape was so unnerving that I never finished the show.

That dread returned tenfold while playing a demo of Chernobyl Liquidators Simulator in the Steam Next Fest, an hour-long journey in the boots of a first responder working to quell fires and salvage what’s left of the doomed plant.

It’s almost frustrating that the game calls itself a simulator because, while dousing fires and cutting a path through the facility are true to the job and feel pretty darn good in action, Chernobyl Liquidators is closer to a story-driven adventure than a blue-collar labor game like Farming Simulator.

After learning the basics of your fire hose and refilling water tanks at the base of the facility, you’re soon given the monumental task of reaching the top of one of the nearby buildings to rescue any workers still trapped inside. The rest of the demo plays out like a more harrowing, equally improbable chapter of Uncharted—finding alternate paths around collapsed hallways, chancing an uneven footbridge over a 50-foot drop, and the occasional death-defying leap. Water management is also a big part of the game. You only have around 30-45 seconds of continuous water and accurately dousing a fire while keeping a safe distance from the blaze can be tricky. Slipping up and venturing too close to fire (or the glowing blue radioactive debris) rapidly drains HP.

Chernobyl Liquidators has a compelling dedication to the first-person perspective. The way I yank my hose into frame, attack a stubborn door with my shovel, or reorient myself on the diegetic handheld map is immersive and completely convincing. I love that it keeps me in the world and out of menus.

Environments are just as impressive. There’s an impenetrable haze in the air that makes every inch feel like a mile. Sirens wail in the distance as the unstable architecture groans like it could give way any minute. An encroaching blue glow and ringing sound alert me to nearby radioactive debris, a danger obvious to me and not my firefighter. I shouldn’t be anywhere near this stuff, but the best I can do is shovel it away and soldier on. By the end, my firefighter’s coughs had turned into vomiting and I was nearly at my limit. If this were a VR game, I’m afraid I’d suffocate out of empathy.

It’s a really strong demo that’s sometimes hard to play, both for emotional and technical reasons. The Unity game hitched up a fair amount on my mid-tier RTX 2060 build each time a new area loaded in and not every control is as intuitive as the basic hose action. You do a lot of climbing in the back half of the demo that reminded me of the stiff tower climbing in recent Far Cry games (jump, mantle, jump mantle, etc). I also really wish the secondary tools like the bolt cutters and crowbar were fully usable, but they’re only equipped for canned animations.

It can also be hard to tell at times when you’re losing health unless you hear the faint burning sound or glance at your health bar. It’s a demo for a game that still has a ways to go, so these observations may not apply by the time it releases.

Speaking of, it’s hard to tell where exactly Chernobyl Liquidators goes after the demo ends. The trailer on the Steam page suggests there are daytime missions that presumably take place sometime after the incident. There’s a brief glimpse of the other ‘liquidator’ roles playable in the rest of the game, including one that’s scanning the environment with what I think is a Geiger counter. Interesting!

I’ve been trying out a lot of demos from Steam Next Fest the past few days and none have left as lasting an impression as Chernobyl Liquidators Simulator. Confusing name aside, this is one worth paying attention to.