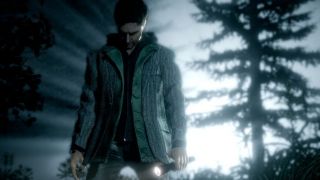 Remedy’s 2010 supernatural shooter Alan Wake may be getting remastered, thanks to an updated listing on the Epic Games Store.

Spotted by industry happenings magnet Wario64, a site tracker for the Epic Games Store spotted changes to a listing codenamed HeronStaging added a cloud save folder reference for Alan Wake Remastered. Another item, Pineapple QA, was spotted pulling a similar trick for Final Fantasy 7 Remastered, which currently has no planned PC release date.

As noted by VGC, Final Fantasy 7’s 12-month exclusivity period on PlayStation consoles ran out this April, though Square hasn’t made formal announcements for other platforms. The publisher did, however, recently bring the entire Kingdom Hearts series to PC for the first time by way of Epic.

Remedy, meanwhile, is currently working closely with Epic on two major projects—one “AAA multiplatform game” plus a smaller-scale game supposedly set in the same universe. Remedy has also long-teased a return to Alan Wake as part of a Remedy Connected Universe. If one of these two games is, in fact, a new Alan Wake, it’s not hard to image the smaller project to be a remaster of the 11-year-old original.

It’s worth noting that, at time of writing, both references have been removed from the EpicData Tracker. Neither Alan Wake Remastered nor a FF7R release on Epic have been officially confirmed, but both are starting to look very likely.