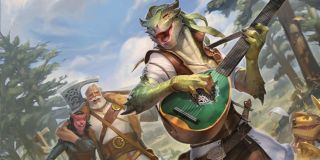 One of Magic’s most unusual recent sets is Adventures in the Forgotten Realms, a cross-pollination of Dungeons & Dragons with the 30-year-old card game. The new set isn’t the first crossover ever, but it has me back on the rug of my childhood, reliving my best action figure mashups and poring over old binders of foil cards.

With 281 cards in the set (101 commons, 80 uncommons, 60 rares, 20 mythic rares, 20 basic lands) and 68 more new cards in the four commander decks, there’s a ton of new toys. While we won’t truly know the impact of AFR on standard until Throne of Eldraine releases its deathgrip on the format in September. A few cards have started to pop their head up in eternal formats, but the true winners here are those of us who get giddy at seeing fun and interesting casual cards. As a lifelong Magic player, here are a few I love.

The simplest version of fantasy games often boils down to similar experiences in both Magic and D&D: take a risk going into the dungeon (or gaming store), pay the price in hit points (or from your wallet), and come out with the unknown treasures within (booster packs). The cycle of discovery and reward runs true in both games, and Triumphant Adventurer, his smug grin of satisfaction and the gameplay loop that he creates—attack your opponent and then get your reward by venturing into the dungeon—perfectly captures this.

Not only is this book good reading, it also generates a Platinum Angel when you need it to, or plain old regular Angels each turn. People have already discovered how much of a nasty surprise it is to pair with a Mutavault or Faceless Haven. While not splashing into other colors very well, it does fairly well in a white devotion deck, and feels like the most traditionally ‘white mana’ of all the cards in AFR.

Part of the showcase frame cards for AFR, the “adventure module” showcases are nine lands with frames emulating classic D&D adventure modules, and using alternate art. Of all the hall of fame of fantasy artists, nobody has latched onto my brain stem the way Larry Elmore has. I love all the retro styled cards from this set, and the crown jewel of them is Elmore’s work. Gracing the cover of the most iconic early D&D starter, the red box—the original art before edits was saved from a dumpster and returned to Elmore decades later, coffee stains and scrawled notes intact—his art has been the anvil that many D&D players were forged on. This piece, and the memories of all the old adventure modules and book covers, is going to sneak into so many of my future decks.

Maybe it’s simply a lifelong love of skeletons that endears Flameskull to me so much, or that the monster’s look straddles the uncanny valley between spooky and derpy. They burn away the top card of your deck every time they die, so you have the choice of bringing them back or playing whatever other card shows up. I know I’m going to enjoy playing him again and again as my deck withers away, because who doesn’t want to bring back their flaming skull buddy?

A powerful enchanted item in D&D, the Deck of Many Things tempts you to draw cards for random magical effects. Like so many other dungeon delvers, I have dozens of stories of D&D campaigns sent screaming off the rails into the void with the party discovering a Deck in some dusty treasure hoard. Gaining and losing levels, summoning powerful artifacts, and fighting death, all in the name of just one more pull. I was really happy to see that the card version of my eternal nemesis continues the tradition of making me want to ruin my plans in the pursuit of the exact same cardboard high that drives me to buy booster packs.

As a competitive card, Wish has its limits—in forcing you to play the card immediately—but the flexibility in casual games fills me with childlike glee. Does anyone not dream of using Wish and then getting to dig through boxes and binders to find the funniest and most unexpected card? Finally, it’s time for my foil Mudhole to shine!

I can’t describe the pure joy that I felt—expressed in a primal battle shout to “go for the eyes”—seeing that Minsc would be making an appearance. My auto-include in my journeys through Baldur’s Gate and his littlest companion takes me back to managing my spell slots and desperately pausing combat as my fight against a beholder spirals out of control.

Look, I’m not going to turn down the opportunity to turn the game into a bone-themed mosh pit. A raveyard, if you will.

The goofy, comically evil, and decadent mafioso leader of the Skullport thieves guild finally answers a question I didn’t know I had: what’s better than playing one good deck?

A fantastic value engine in white that pairs amazingly with some of the recent creatures that take swings when they enter the battlefield. It also makes me wonder, does every good card in white need to glow? As long as their art is this gorgeous I’m not going to question it.

The ultimate in magical savings and loan, Treasure Vault can set you up for a massive turn, enable artifact and affinity strategies, and possibly even julienne fries. Every time I look at it I’m reminded of just how much a part of me still wants a giant vault of coins to swim around in, like an awkward gold aquarium.

As my favorite class in D&D, the Bard has always been a storyteller and purveyor of myth and legend to me. The card version has really nailed this, rewarding me for playing a giant pile of cool legendary cards, and enabling me to play even more of them as I level up. My only complaint is that it narrows me to red/green ones, but I don’t mind getting that monkey off my back.

The essence of thievery was always a point of contention in D&D for me. Do I steal from the shopkeeper and potentially make our game about fleeing from the entire city watch? Am I still a hero if I’m robbing merchants blind? But when I can stop worrying about that and instead rob my opponents deck, I get to be the backstabbing cat burglar I’ve always wanted to be, and if my deck sucks, maybe their deck will be better. Yoink.