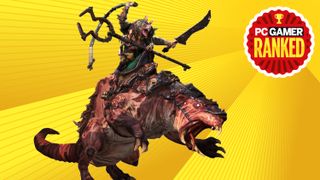 PC Gamer Ranked are our ridiculously comprehensive lists of the best, worst, and everything in-between from every corner of PC gaming.

Total War: Warhammer 3 might be on its way, but if you fancy watching rats, lizards and elves murder each other right now, Warhammer 2 will take excellent care of you. Creative Assembly has spent the last four years expanding it, and there’s now a big list of DLC to sift through. Buying everything will set you back around £90/$110. To make sure you only get the best, we’ve ranked the lot.

Before we jump in, however, it’s worth noting that nearly all of the DLC on this list gets a recommendation. There’s always at least something, whether it’s a new lord, unit or faction mechanic, that shakes up the meta and makes the DLC worth a punt. There are a lot of additions that are equally crucial, too, so instead of ranking each DLC individually, they’ve been placed in tiers.

Rise of the Tomb Lords was the first of Warhammer 2’s full expansions, and as such it’s much meatier than a lot of the DLC in this list. It introduces the rotting Tomb Lords, a bunch of mummified villains up to no good. This additional race also comes with a bunch of factions and starting situations, and unique systems to use during the Eye of the Vortex campaign. This spices up the main mode considerably, especially if you’ve already conquered it as one of the original races.

If you follow the Rule of Cool, you’ll find plenty of exotic units to keep you happy, including colossal animated statues and skeletons riding giant snakes. And it’s much easier to put together big armies full of this stuff, thanks to the absence of recruitment and upkeep costs. The undead are extremely economical. It also means you can take greater risks, since the loss of an army isn’t nearly as big a deal as it might be when playing another race. One of the factions also includes units from the first game’s Vampire Nobles, so you can really get the undead party started.

Warhammer 2’s only other full expansion is also undead themed. Curse of the Vampire Coast brings the bloodsuckers into Warhammer 2 but, unlike their noble counterparts from the first game, this bunch of walking corpses love a bit of piracy. Undead pirates alone make this worthy of inclusion in S-tier, but it also includes giant crabs and other hideous, damp monstrosities, making it even easier to recommend.

Like the Tomb Lords, these piratical vamps also have their own quest and unique systems in the Eye of the Vortex campaign. The ability to establish secret pirate coves is reminiscent of the foul skaven undercities, generating cash and more infamy, the latter of which is essential to winning the campaign. This is also the race for you if you want more guns in Warhammer 2. These guys love to shoot, and they’re backed up by some nasty artillery.

Free if you own both games

Though technically free DLC, Mortal Empires requires both games to play, but it’s entirely worth buying the original Warhammer for even if you have no plans to play through the vanilla campaign. What it does is squash both Old and New World maps together, with a few cuts, to create a ridiculous mega-map, upon which the gargantuan Mortal Empires campaign takes place.

Every race, faction and leader from both games is available to play, as long as you have the appropriate DLC, in the ultimate battle. It’s Total War: Warhammer unshackled. Performance used to be the price you had to pay, with wait times being absurdly long while the AI made its moves. This was understandable, given the vast number of factions and huge world, but Creative Assembly has made some big improvements in this regard. These days, you’ll hardly notice the wait, especially if you’re using an SSD.

Creative Assembly’s latest expansion is the quintessential Warhammer 2 DLC. It revitalises a race that has long been ignored—in this case the beastmen—taking them from garbage to one of the best, and it makes fans of the lizardmen sad. Warhammer’s scaliest warriors have had lots of DLC, and none of it great, and The Silence & The Fury continues this tradition. But it still belongs in this tier because the beastmen are back, baby.

The new beastmen leader, Taurox, is blessed with one of the game’s best campaigns, bolstered by a dizzying momentum. If you want total war in Total War, this is the fella you’ll want to play with. Destruction is his deal, and he’s very good at it. He’s also a bull made out of living bronze, which is very cool. He brings with him some great units like the beastly Doombull Lord, and the absolutely grotesque Jabberslythe, a slimy, venomous toad-monster. I should add that while his lizardman counterpart Oxyotl has a crap campaign, his limited teleportation mechanic and new units like the Skink Oracle, a magical hero riding a mighty troglodon, are welcome additions.