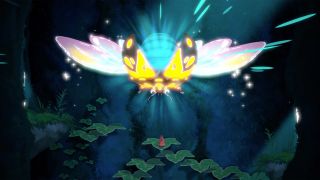 Hoa is a puzzle platformer with a rich painterly art style reminiscent of Studio Ghibli (it’s not the only game to reference that studio this week—see below). You control Hoa as she moves from left to right through these captivating environments, solving light puzzles and meeting whimsical fantasy creatures along the way. That’s pretty much all there is to it: the Steam description suggests this one is for players who don’t like to get stumped, so if you’re after a breezy experience this looks like a nice palette cleanser.

Andy Kelly described this as “Warioware, but spooky” which is pretty much all you need to know about this DreadXP outing. The minigames are connected by an overarching plot involving three “skelebros” going on a road trip, and there are more than 60 in this first episode, with more to come in later instalments. According to DreadXP these minigames are short and snappy experiences, and involve everything from “filing your taxes” through to “frantically decapitating some poor guy’s head.” Spooky wares indeed.

Sprocket is all about designing tanks, and then trying them out on the battlefield. The design aspect is definitely the focus here: pretty much every single element of a tank can be tinkered with ranging the tracks, armour and cannon design, but heaps more besides. The game boasts a “full powertrain simulation” so every aspect of the tank that you’ve tweaked will have a noticeable effect on how it performs on the battlefield. It’s an Early Access outing, where it’s expected to stay for about 24 months while the studio expands and improves the game.

Here’s a new retro-style survival horror game which apparently plays a bit like a Resident Evil game—if Resident Evil was a top down 16-bit pixel affair. It follows Victor Hartwell as he explores a mid-nineteenth century mansion in search of a cure for the “deadly disease that afflicts his beloved wife, Alissa”. This being a horror game with a mansion in it, you can bet your ass that the mansion is going to have some really scary stuff in it. Given the New England setting, there’s some Lovecraft vibes in this, too.

The second Ghibli-inspired outing this week, Baldo: The Guardian Owls definitely wears its influences openly, but it results in a Zelda-style action adventure game that looks gorgeous in action. Playing as Baldo, you’ll crawl puzzle-strewn dungeons and a pastel-hued overworld, but to what end I don’t know: the Steam page doesn’t have much on the narrative here except that there’s a “no-heart creature” re-emerging from an underworld. Sounds like bad news! Looks like a bit of fun, but there are a few complaints about lack of graphics options in the Steam reviews.

These games were released between August 23 and 30 2021. Some online stores give us a small cut if you buy something through one of our links. Read our affiliate policy for more info. ‌