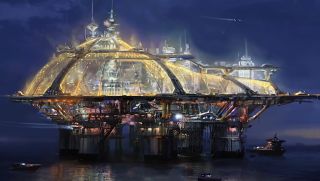 Bethesda Softworks has released a trio of “Location Insights” videos offering a look at three separate locales in its upcoming sci-fi RPG Starfield: The high-tech spaceport of New Atlantis, the rough-and-ready Akila, and Neon, a “pleasure city” where tourists can get high as hell on, uh, fish.

The videos, narrated by design director Emil Pagliarulo, are on Bethesda’s YouTube channel but are currently unlisted, meaning that you won’t see them without a direct link. Those links were sent out via email earlier today to members of Constellation, a Starfield mailing list that promises first access to news, updates, interviews, and other content. Luckily, Bethesda isn’t making any great effort to keep the videos exclusive, and you don’t have to be a member of Constellation to view them—you just have to scroll down a bit.

New Atlantis is the capital city of the United Colonies, the most powerful military and political power in Starfield. “The city is a true melting pot and its residents come from every race, creed, and ethnicity,” Pagliarulo says. “In a lot of ways, New Atlantis is a true reflection of the future of our world.”

Akila, the capital city of the Freestar Collective, is a much rougher place, populated by people who hold to “the sanctity of personal freedom and individuality” above all else. It’s a walled city, which doesn’t sound like it would be of much value in the distant, space-faring future, but it turns out that the planet is populated by extremely hostile, dangerous predators known as Ashta, described as “a cross between a wolf and a velociraptor.” Seems like a pretty iffy municipal management decision to me.

Finally, there’s Neon, possibly the most interesting place of the three: It was originally designed as a large-scale fishing platform, but shortly after it was launched corporate overlords discovered that one of the planet’s indigenous fish had serious psychotropic properties. The drug trade is far more lucrative than industrial fishing, and so it was a matter of very little time before the whole thing was converted to a waterborne pleasure dome where the galaxy’s citizenry can come to party their faces off.

My initial impression is that this blend of RPG tropes—a powerful neo-empire, rugged frontier town, and “anything goes” pleasure palace—is so rote that it’s a virtual cliche. (Give it a license and some voice actors and it could be Firefly: The Game—or give it to EA and call it Titanfall: The RPG Experience.) But it’s also all very preliminary, and we know extremely little about the game otherwise, so it’s far too early to make any meaningful judgments about what Bethesda has in store.

Starfield has been in development for years—Todd Howard said it was in a “playable” state all the way back in 2018—but it’s still more than a year off, and isn’t slated to come out until November 11, 2022. If you’d like to sign up for Constellation, you can give ’em your name at bethesda.net.