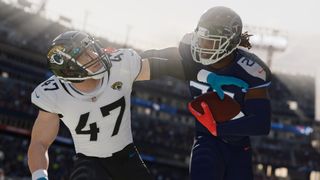 Without fail, the Madden NFL series returns every August every year since what seems like forever. Not even a pandemic could derail this train. Opinions on this year’s installment are mixed overall, though for my money, it is, if little else, the best game in years for Franchise players specifically.

While Madden Ultimate Team receives virtually no upgrades this year and flashier modes like The Yard and Superstar KO gets only incremental improvements, Franchise has clearly been the focus, and the result is a game that feels deeper and more satisfying for those players specifically. Here’s everything to help get you going in Madden NFL 22.

On offense, you’ll have a few different ways to deliver the ball to your intended target, and each type of throw is useful for different situations. Knowing how to use these moves will make the difference between a TD leader and an interception machine. When the QB has the ball, you can choose to throw the ball in one of several ways including:

For the most part, these may be pretty self-explanatory. A lob is best to arc the ball over the defender’s reach, while a bullet pass is used to get the ball into a tight window quickly. Similarly, a high pass will cause your receiver to catch the ball at its highest point (or at least try), while a low pass will have your receiver sink into the dirt and secure the ball if he’s able.

The one that trips people up every year is the ‘press and release’ touch pass. The touch pass exists between the lob and the bullet and is meant to lead the receiver and sail over defenders, usually those playing the middle of the field or strafing in a zone waiting to pounce on the ball. If you think of the lob as a quick button press, and the bullet as a firm hold, the touch pass is the happy medium, like choosing your soda from a vending machine.

If you’re on the opposite side of the ball, it’s your job to disrupt the quarterback and prevent him from ever getting used to all those fancy buttons mentioned above. Introduced last year, the defensive line moves return for another season in Madden 22 and greatly improve your ability to play the defensive line by using several different maneuvers to overpower or speed past blockers. On the D line, you can use the following moves:

Like with the QB moves, it’s vital to know what these all mean. A speed rush uses a player’s quickness to get into the backfield, while a rip throws an offensive lineman’s arms down like you’re undoing their jacket zipper. A club/swim is the opposite of a rip, throwing a blocker’s arm upward, ideally quite forcefully like Aaron Donald.

A bull rush is a head-on battle of strength. Lastly, playing contain foregoes any pass rush and instead keeps your defender protecting the corner, seeking to keep the ball carrier, be it the QB, RB, or another player, within the pocket, disabling them from bouncing outside for a potentially big play.

Sometimes you’ll get to the line of scrimmage and not like what you see. Maybe the offense is primed to exploit a mismatch, or the defense looks like they’re bringing the blitz and you’re not ready for it. Calling audibles can save not just the play in the moment, but in the most extreme cases, it can win games or even end seasons.

To call an audible, you need to be at the line of scrimmage. Press X/Square to bring up the audible menu, wherein you’ll see four alternate plays you can swap to by pressing their corresponding button. Each of those plays will be from within the same formation you were in when you broke the huddle, but you can also swap to other formations provided you have the right personnel on the field by cycling left or right on the d-pad.

This is useful not just when needing to switch the play, but simply wanting to in order to confuse your opponent. Though they can’t see your play, they can see the formation you’ll be lining up in before they pick their play (if they’re patient, that is). So calling one decoy play to get them to prepare for it, only to then audible into a new play can leave them scrambling. Football is partly a mental game, and smart audibles are one way to gain the mental edge.

This year’s game puts all of its chips into the Franchise pile, and the results mostly pay off. Franchise is Madden’s most popular mode wherein players control a team in a league by themselves or with up to 31 others and compete for the Super Bowl championship season after season, game after game. New this year are coaching skill trees, which give Madden a new RPG-lite element where they can create builds for their coaching staff across four key positions.

Franchise also includes a revamped training system that now allows players both more control over how their players practice, but also eliminates the oft-skipped practice sessions themselves, meaning you earn your XP in full faster this year. A new “story engine” sprinkles in more narrative before every game, like team meetings, press conferences, and bump-ins with rivals. In each case your choices will have an on-field impact in the form of attribute boosts or greater rewards for achieving milestones such as throwing four TD passes or intercepting the QB twice.

In September, the game’s first major update is intended to expand upon college scouting too, giving players more insight into draft prospects than ever before.

If running the real-life roster of your favorite team isn’t your preference, it may be that Madden Ultimate Team is instead. In MUT, players play daily, weekly, and season-long challenges against AI and other human players alike, competing for rare virtual trading cards and coins that can be spent on additional cards or card packs in the MUT shop. EA is happy to let you spend real money, too, though for the players who grind out the mode, you won’t need to spend a dime.