Hot News How much Deus Ex is in Guardians of the Galaxy&quest; 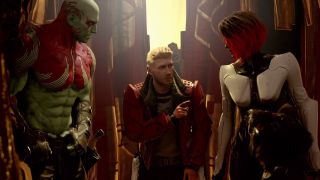 Even with my tinfoil ‘every conspiracy theory is true’ hat on, I can’t imagine a near-future where we get another Deus Ex. The series was a victim of an almighty reshuffle among Square Enix’s Western studios, as the publisher prioritised licensed Marvel games over everything else. With Crystal Dynamics tackling Avengers, Tomb Raider was handed off to Deus Ex studio Eidos Montreal—leaving Adam Jensen kicking about his apartment in Prague, reading other peoples’ emails to pass the time.

Now that Eidos Montreal has announced Guardians of the Galaxy, a Marvel project involving key members of the Deus Ex team, an imminent sequel to Mankind Divided looks more unlikely than ever. But there’s solace to be found in Quill and Co’s comedy adventure, which appears to be run through with Deus Ex DNA.

You might have recognised a pleasantly alliterative name tag pop up during the Square Enix E3 showcase: Mary DeMarle. The executive narrative director of Guardians of the Galaxy ran the writing teams for both Human Revolution and Mankind Divided, lending surprising nuance to boss characters with snow ploughs built into their armour. She kept morale high when the whole world was sceptical about a Deus Ex reboot—a skill that can only help in the wake of Marvel’s Avengers’ critical drubbing.

DeMarle’s determination to find the discomforting aspects of her heroes, as well as the redeeming qualities of their enemies, is a strong fit for Guardians of the Galaxy. The series has always revolved around a morally-challenged bunch of misfits—the E3 footage featured an argument about which member of the crew was most ‘monstrous’, and so suitable to be sold to a monster collector named Lady Hellbender.

Hellbender herself is a sympathetic character—traumatised when her gambling dad entered her pet monster as a combatant in a gladiatorial arena. Something we can all relate to. Point is, you can expect antagonists just as complicated as Hugh Darrow, Human Revolution’s Nobel Prize winner and tormenter of augmented people all over the world.

We’re at a moment in time where even campaign-driven games are sometimes launched atop of charmless content platforms designed for deathless live service. Marvel’s Avengers was as guilty as any, its world-class story set against a backdrop of daily challenges and gear grinds. But Guardians of the Galaxy is refreshingly free of all that. It starts, it ends, you can play it again if you like or move on with your life. That easily-repeatable structure was always key to the appeal of Deus Ex—only by replaying its games could you truly appreciate the ways in which its plots diverged according to your actions. What do you mean Paul Denton can be saved?

Eidos considered making Guardians of the Galaxy cooperative, but preferred to surprise players with unpredictable scripted behaviour from their companions— which they’re forced to respond to as Quill, the Guardians’ so-called leader. Which leads us to…

There’s no expectation for action-adventure games to include branched storytellin—at least not since the post-Mass Effect boom in the late ‘00s, when even open-world knockabouts asked you to pick between the light side and killing a family member for kicks. So it’s a surprise to see Guardians of the Galaxy laced with conversation options—pauses in the dialogue which ask you to back certain companions over others, or decide whether to endorse a particularly dangerous course of action, like throwing a colleague over a ravine.

It was a principle of Jean-François Dugas, Eidos Montreal’s executive game director, that all missions in Deus Ex: Human Revolution have multi-path solutions. Though Guardians of the Galaxy’s moment-to-moment action definitely looks more linear, it’s a relief to see that philosophy survive in some form.

After all, there’s little more Deus Ex than making a call on a decision way above your paygrade, on the behalf of others who might not approve. Will Guardians of the Galaxy push you to pick the fate of an entire planet and species, as the original Deus Ex did? Actually, that sounds quite feasible. Only this time, it’d probably be played for laughs.

Eidos Montreal’s Deus Ex games were notable for their dialogue challenges—linguistic boss fights in which you attempted to bring the subject around to your way of thinking. While showing off the studio’s story chops, these were also real battles, broken up into rounds and influenced by timely blasts of pheromones.

In Guardians of the Galaxy, the equivalent is the huddle—an American football-style formation that can be triggered during an encounter with enemies. While huddled, the Guardians give you feedback on how the fight’s going, and the player can choose between different approaches for a pep talk—incorporating elements from Star-Lord’s favourite songs, for maximum comedy value. If Star-Lord’s speech meets the whole team’s needs, they’ll all be buffed; if not, only Quill will benefit, high on his own ego.

Deus Ex fans love a box. Stack ‘em, throw ‘em, crack ‘em open for goodies. They are the ultimate enablers, blank tools used to solve problems in whatever way you see fit. It’s a fitting tribute, then, that the only enemies shown in Guardians of the Galaxy to date are gelatinous cubes.

Bit weird, I know, but Deus Ex fans will know what I mean. Since that initial trauma of having our boss call us out for wandering into the ladies’ toilets at UNATCO, the series has become synonymous with lavatories. Eidos Montreal took up that baton—or toilet brush—with some extraordinarily detailed private spaces. Here are some of the finest examples, snapped by PC Gamer’s resident in-game photographer, Andy Kelly:

Why does a man with metal arms need moisturiser? Nobody knows.

Leave a reply "Hot News How much Deus Ex is in Guardians of the Galaxy&quest;" Cancel reply

Related Post "Hot News How much Deus Ex is in Guardians of the Galaxy&quest;"