Hot News World of Warships uses bonus code to say 'FK U' to streamer, uses another code to apologize 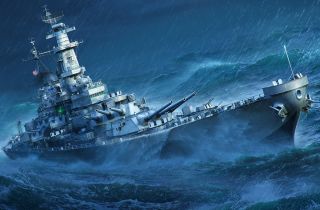 World of Warships developer Wargaming has apologized for using an in-game bonus code to say “f— you” to a former member of its Community Contributors program—and demonstrated the sincerity of its contrition by issuing another in-game bonus code that says sorry.

Tensions between Wargaming and its community recently boiled over when several high-profile World of Warships streamers and content creators stopped playing the game in protest of its overly-aggressive monetization policies.

One Community Contributor who didn’t quit is a Russian streamer who goes by the name of Turry. Instead, according to this Reddit thread, he was kicked out of the program by Wargaming for being overly critical of the development team.

That’s not a great look for any game studio, and particularly one that’s presumably trying to improve relations with its community. But it got a whole lot worse when the studio offered a promo code to viewers of a Russian-language stream, W0LAXU5FKUTURY5, which provided bonus in-game content to players on Russian servers.

It probably didn’t mean much in Russian, but English-speaking players very quickly noticed the “FKUTURY” segment of the code—not at all hard to see as “FK U TURY.” Any possibility that the string of letters was an extraordinarily unfortunate coincidence was eliminated when Wargaming copped to the intentional insult in a forum post:

“As you know, last Friday a bonus code with offensive content was distributed on our official stream, insulting our player and the popular streamer Turry,” the post says. “This is unacceptable. We conducted an internal audit and found that this situation occurred due to the actions of a certain employee. The employee was suspended from this job and the most stringent measures were applied to him according to the results of the audit.

“On behalf of the entire World of Warships team, we apologize to the players, the viewers of Friday’s stream, and, most importantly, we apologize to @Turry. We made an unacceptable statement in your address and are fully aware of our responsibility.”

Wargaming confirmed to PC Gamer via email that the post is legitimate, and provided the English-language translation above.

“We can confirm that the unfortunate situation has happened and that our team responded quickly to identify and sanction the responsible individual,” a studio representative said. “Even though in no way the actions of this individual were approved or encouraged, we understand that we are accountable for the incident as a team. Rest assured we don’t take this situation lightly and we don’t tolerate any sort of disrespectful communication.”

Wargaming also released a new bonus code for players, TURRYWEARESORRY, which provides players with 1,500 community tokens that can be used to purchase in-game loot.

In an email, Turry said that he was initially “very offended” and angry about the code, but eventually decided to see it through a humorous lens. He also received a direct apology from Wargaming for the code, which helped smooth things out, although he’s still not entire satisfied with the resolution.

“From one side I am satisfied with their excuses, and they sent me two bonus codes for my subscribers,” he wrote. “But on the other, I still don’t know who was guilty in this situation and if he would be punished for this failure or not.”

Despite the apology, Turry said Wargaming has not offered to re-admit him to the Community Contributors program, which is fine because he wouldn’t come back anyway. At the same time, he said he’s going to continue to make content about World of Warships. “I love this game very much despite the developer’s behavior,” he writes. “I hope it will soon change somehow.”