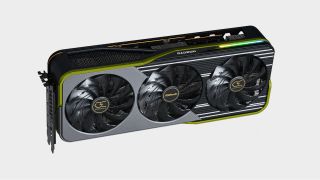 Demand for graphics cards may be slipping in China, says AMD graphics card manufacturer ASRock. Traditionally a component manufacturer, the company began dabbling in Radeon graphics cards just in time for a wave of cryptocurrency demand, which it now says is showing signs of slowing.

ASRock expects sales to grow in the coming months despite component shortages (we know all about those) and shrinking demand for cryptocurrency mining cards in China, reports Digitimes (via Tom’s Hardware)

China is the country with the highest cryptocurrency mining hash rate, meaning there are more GPUs and ASICs chipping away at the blockchain there than anywhere else. A declining demand could be indicative of a more global trend, or that China’s crackdown on crypto is actually having an effect on the market.

In more concrete terms, though, ASRock is expecting AMD GPU shipments to increase in during the second half of the year.

Past that it all remains pretty murky, it says. No one really knows how the chip shortage or the market will deal with the busy holiday season, but you’d like to think there would be some hope of picking up a Radeon RX 6000-series chip by Christmas.

So is this it, the end of PC gaming’s cryptopocalypse? I dare say we’re not out of the woods yet. Mining profitability will ebb and flow over time, but we remain in a period of high profitability for even at-home miners, let alone the big business mining operations.

There is some glimmer of hope, however. Ethereum, the most popular blockchain network for GPU mining, is planning to kill mining “in the upcoming months”. It will replace it with a proof-of-stake consensus system. What that means is GPUs will no longer be required to verify transactions across the network and card demand, for Ethereum mining at least, will fall.

Whether that will translate to more cards in the market is yet to be seen, as there’s a chance GPU miners will shift their attention to one of the many other cryptocurrencies still utilising a proof-of-work (mining) consensus system.

Most cryptocurrencies have settled in at a new low for the year following Bitcoin’s price plummet back in May, and that may mean that some miners are starting to feel the squeeze on profits. That said, many cryptocurrencies are worth far in excess of their value last year.

The point remains that news of a declining demand is potentially good news for PC gamers in a graphical pinch, although I wouldn’t start celebrating just yet. Cryptocurrency is highly volatile and its fortunes can change in an instant, and there’s also the small matter of the ongoing global chip shortage.