Hot News The best builds for Barbara in Genshin Impact 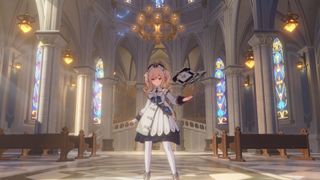 Want to find the best Genshin Impact Barbara build? Unless you were lucky enough to roll another early in the game, it’s likely that the Deaconess of the Church of Favonius was your first dedicated healer. And Barbara is good at what she does.

Sure, she isn’t great at dealing damage⁠—unless you put work into building her⁠ that way— but her Elemental Burst and Skill both offer powerful healing. The Melody Loop she creates during her elemental skill is also a good way of applying the wet status to enemies to set up reactions, even if you do have to stand right next to them for it to work.

With Genshin Impact 2.1 on the horizon, it looks like Kokomi may basically be a super Barbara, with both healing and damage-based abilities that scale from her max HP. But no matter how powerful new characters are, Barbara will still be that same free reliable healer.

Anyway, here’s the best Genshin Impact Barbara build, along with details about her Ascension materials, and how to get her in the game.

Barbara is basically good at two things: healing and Hydro. Our Barbara builds focus on making the most of both:

This four-star catalyst is a good fit for Barbara. First, it gives an HP boost of 10%, which is useful as her elemental skill’s healing scales on her max HP. Second, Prototype Amber regenerates 12 energy over six seconds every time you use an elemental burst, as well as regenerating 4% HP for all party members every two seconds.

This both increases the healing effectiveness of Barbara’s abilities and grants her energy regeneration so she can use them more often, which in the end, is what you want from a dedicated healer.

Maiden Beloved is a straightforward artifact pick for Barbara. A two-piece set increases Barbara’s healing effectiveness by 15%, while a four-piece set boosts party healing by 20% for ten seconds every time you use an elemental burst or skill.

This build turns Barbara into a healing powerhouse, able to quickly recharge energy, while also topping off your party members’ HP whenever they need it.

As a Hydro catalyst user, Barbara is able to cause all sorts of elemental reactions when in the right party combination, and in many ways it’s the most viable way to use her as a DPS, especially considering her burst doesn’t deal damage and her skill is mainly focused around healing.