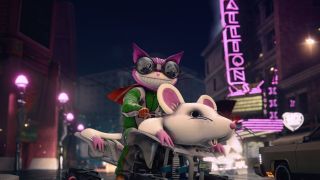 The new Saints Row reboot was announced as an Epic Games Store exclusive earlier today, and to coincide with that, the recent Saints Row: The Third Remastered is available free of charge. The offer lasts until September 2, and if you grab it now it’ll stay in your library forever, or for as long as videogame digital storefronts exist.

While the series has always been pretty zany, Saints Row: The Third was the first to go bizarre, culminating in the ridiculous superhero theatrics of Saints Row 4. It’s a decent open world crime outing, and there’s a weapon that shoots mind-control octopuses at your enemies: no other game has done that to my knowledge.

Saints Row is the third game to be free on the Epic Games Store this week: Void Bastards and Yooka-Laylee are also available, while next week Automachef will get the giveaway treatment.

Morgan got a close look at the new Saints Row game, which hits the Epic Games Store on February 25. “A new main cast and city certainly freshen things up a bit, but as a whole, Saints Row seems very similar to the games before it,” he wrote. “Volition promises that the shooting is still arcady, driving is better than ever, and the weapon choice is vast.”