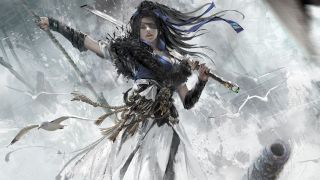 A handful of new Naraka: Bladepoint characters have seemingly been revealed, pointing to potential new fighting styles you’ll be able to use in the sword-swinging melee battle royale. Users on the Naraka: Bladepoint subreddit posted a number of images from the game’s official digital art book, which only came with the ultimate edition, giving a glimpse at concept art that shows off characters we’ve yet to see in-game.

Check out the gallery below.

First up is a samurai guy, which is pretty par for the course as far as Naraka’s eastern influences go. Next up is a young-looking Taoist warrior. He’s brandishing what appears to be a slim wooden instrument. Third is what looks like an imperial guard or knight. Some Reddit users are noting it may be inspired by the JinYiWei, the imperial police that served Ming dynasty emperors.

Fourth, we’ve got a raven-haired woman with an eyepatch and a more traditional-looking samurai sword. There’s likely some classic wuxia influences here. Fifth, we have a woman who seems ready for a funeral. I imagine it’s yours, considering her sword is on fire.

For now, there’s no official word on when — if ever — these characters will arrive in Naraka: Bladepoint. It’s entirely possible these characters may simply be art references for universe-building.

If you’re interested in trying out a very different kind of battle royale, Naraka is a solid place to start. We’ve got a ton of guides: The best PC settings for Naraka: Bladepoint, tips for combat and countering, and our impressions of Naraka: Bladepoints first few hours.