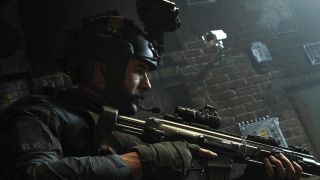 The RAM-7 has been in the Warzone meta ever since its addition back in the Modern Warfare days, and today it’s still going strong as a solid, reliable weapon usable at multiple ranges. Since it’s a weapon from 2019’s version of Call of Duty, you’ll need to fulfil a specific challenge to get it unlocked.

For this one, you’ll want to get 2 headshots with Assault Rifles in 25 different matches. This is easier to do in Modern Warfare’s Shoot the Ship mode, but if you’re feeling the grind it’s more than manageable in Plunder, Battle Royale, or Rebirth Island. It’s far from easy though, so don’t say I didn’t warn you.

I love using the RAM-7 these days. Without wishing to wax nostalgic, it reminds me of early Warzone. Back when it was the go-to game of choice for my whole group of friends and we could just hop in and while the lockdown hours away in Verdansk. This ranged build is the perfect throwback to the meta back then, back when the Grau 5.56 dominated at range and was rivalled only by other laserbeam rifles.

Well, this laserbeam RAM-7 build still works to this day! With the Monolithic Suppressor on there it’ll stay silent while you fire, and along with it comes the classic range and bullet velocity boosts we come to expect from the quintessential muzzle attachment. Coupled with the FSS Ranger barrel to further improve your range whilst also helping your recoil significantly, your RAM-7 will be an absolute beast at range.

The Commando Foregrip is another fantastic option when it comes to reducing the RAM-7’s recoil – just remember to have a lighter secondary on hand to hold onto while you move from place to place. This RAM-7 is a heavy piece of kit and thus will slow you down significantly.

The final two attachments are obvious choices when it comes to building a long-range assault rifle. Firstly, we have the VLK 3.0x Optic. This scope is widely seen as the best from the Modern Warfare guns, and it’s easy to see why. I just love how clean the optic is, and with that perfect level of magnification it’s just so much easier to stay on target while tracking an enemy. Secondly, we have the extended mag. With long-range ARs, we usually go for the biggest boost possible in this department, especially when you’re dealing with squads in the Warzone. Unfortunately, the RAM-7 only has one option here – the 50 Round Mags. Not to worry though, that’s a decent amount and is 100% worth sticking on your weapon.

Secondary-wise I’ve picked the MP5, but you could just as easily grab yourself an AK-74u, or even a TEC-9 if you’re feeling spicy. Basically, grab a close-range SMG and you’ll be golden, especially if you have long distances to travel. The MP5 is my go-to because it’s just so reliable, and has been ever since the Modern Warfare version completely broke the multiplayer meta back in the day.

I like using EOD with this class, since when you get peppered with Semtex while you try to beam enemies, you’re far less likely to die with that perk switched on. It can give you the final push you need to survive. Overkill is pretty important with this build, but if you can find a second loadout or a functional secondary weapon as ground loot, Ghost is a fantastic choice. Even with Tempered now in the game, Ghost just keeps foes off your back big time. Enemies will be hunting you down, you absolute long-ranged beast, you. With Heartbeat Sensors and UAVs too. Get out of the way and they’ll find it a lot harder to take you down. If they don’t have Ghost, you can even pick them out with your Heartbeat Sensor.

The final perk is Combat Scout, and I absolutely adore it. This thing is so, so good. With it, you can completely ruin your enemy’s day, lighting them up like a christmas tree when you hit them and allowing your teammates to see an accurate ping of their location on the map. Basically, you can swing around and zap your enemy down. All of this combined makes for one hell of a ranged Assault Rifle, and one I highly recommend.