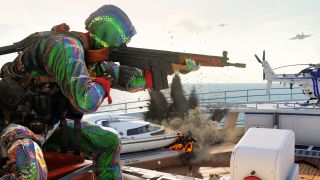 What is it with adding new guns to Modern Warfare? After the announcement of Call of Duty: Vanguard, the Modern Warfare dev team clearly has more in their locker, as the RAAL MG has suddenly appeared in the game.

It’s one of those guns with a special unlock requirement that’ll be a lot easier if you own and play Modern Warfare multiplayer, but with some patience it’s doable in Warzone, particularly in Plunder mode. To unlock the RAAL MG, all you have to do is get 5 kills in 7 matches while using LMGs equipped with a Scout Optic. This is pretty simple to do, and given that it’s a gun from MW, you can quit the matches once you get the required kills.

Anyway, here’s a couple RAAL MG loadouts for you to try.

If you’re wondering, RAAL MG stands for Reconnaissance Auxiliary Assault Lightweight Machine Gun. Now that’s out of the way, let’s get into the long-range loadout.

I’m using the classic laserbeam LMG loadout for this version of the RAAL, and this slow-firing gun can do a great job if you’re playing your cards right. The RAAL Monocore is basically just the Monolithic Suppressor, and it does all the things you want the Monolithic to do: sound suppression, and improved range. It’s extremely important to not plonk a giant dot on the enemy map whenever you take a pot shot from 300 metres away, and the Monocore is essential for this reason.

Our barrel is the 32.0″ RAAL Line Breaker, which both boosts your range and reduces your recoil. Coupled with the PMC grip and VLK 3.0x Optic, you’ll have a weapon that’s super easy to keep on target at longer ranges.

Of course, these attachments, along with the 150 Round Belt, will utterly tank your gun’s mobility. For this reason, I suggest pairing it with a nice little SMG kitted in a balanced way so you can adequately challenge mid- to close-range engagements.

The OTs 9 is great, but so are the MP5 or Bullfrog if you prefer something else.

I really like High Alert for this loadout. Sure, Ghost would get you off the radar (and you need Overkill to guarantee your secondary weapon), but with High Alert you can quickly react when someone is trying to play you at your own game. For ranged loadouts, I usually struggle to enjoy myself when someone else is camping and locking me down, but High Alert allows you to figure out where they are before they get a shot off. It also lets you hear players running at you with Dead Silence, meaning you’re far less likely to get flanked and killed in an unfair-seeming situation.

Combat Scout is another great option in squad-based modes, especially when your teammates can follow up and close the enemy down as they glow bright red.

With these two perks becoming more and more popular, I’m using Cold Blooded on this loadout. It’s the direct counter to High Alert and Combat Scout, so you can avoid shining a big orange light when aiming at an enemy, or lighting up like a firework when hit. It doesn’t hurt that you can’t be easily seen by Thermal scopes too, despite how rare they are.