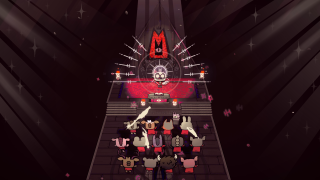 Imagine RimWorld crossed with the Binding of Isaac, with a few seeds borrowed from Stardew Valley, and starring a hectic lamb cult leader—that’s Cult of the Lamb. It’s a dungeon crawler married to a colony management sim, where you control a power-crazed lamb in its quest to grow the biggest cult possible. The lamb has no say in the deal anyway, because it was itself saved from imminent death by a mysterious deity, and in exchange, that deity wants respect.

The way to grow your cult is to recruit, and the way to recruit is to dive into dungeons. “You explore this kind of dark mysterious forest filled with enemy cultists and monsters, and that’s where you find more followers to convert or recruit,” Massive Monster director of game design Jay Armstrong told us. “Once you’re back at your base they’ll work for you and worship you, but you’ve got to keep them fed and keep them alive and keep their faith levels high, because otherwise they’re going to start dissenting against your teachings, and doing uprisings against you.”

Uprisings are the kind of thing you’ll want to avoid as a cult leader, and part of keeping those at bay is performing sermons every day. This lets you guide the cult in a direction you want: you can run a vaguely benevolent one or you can go full Joker-face—it’s up to you. Meanwhile, you’ll also perform sermons every day to your followers, in order to brainwash them into doing your bidding.

“The bad stuff is more fun, to be fair,” Armstrong says. “But when you’re unlocking doctrines [instructions for your followers] you get an option and it’s usually between a darker option or a happier option. We’ve been influenced by movies like Midsommar, so it’s not all satanic skulls and fire, there’s a lot of flowers and that kind of vibe.”

“We want there to be different ways to play with it,” adds creative director Julian Wilton. “For example the followers might be dying, so your doctrine could be that you’ll take those dead bodies and change them into fertilizer when you’re growing crops, and that’ll really help. Or, you can give them a nice burial and other people will be a bit happier about that.”

Brutal pragmatism or naive benevolence? That’s the question. Armstrong describes one playthrough when every single one of his followers died, which is bad, because a cult isn’t a cult if it’s just one lamb. “So I buried them all, harvested their meat, started cooking it so I had lots of food. Then I got new followers in, they had no idea what just happened, so they’re all happily eating this meat. The story continues.”

This isn’t a roguelike, and while it has “elements” of that genre they’re very mild. For example, dying in a dungeon won’t erode any progress made on your settlement, though the time you spent in that dungeon will still have passed: you can come back empty-handed to a very hungry cult. Anyway, if you die in a dungeon you can choose to sacrifice a follower in order to defy death. It may not make your cult happy but what the hell are they going to do without a cult leader, anyway? The dungeons themselves are short and sharp experiences, with mini-bosses and bosses, and a Slay the Spire-style map that lets you move in a direction clearly marked by the kind of reward on offer.

As for your settlement, the strength of it is bolstered by how many followers you’ve recruited, which gradually unlocks new building types. “You can freely place buildings anywhere,” Armstrong says, “and unlocking new ones is a big part of the core loop of the game. As followers are worshiping at your shrine, that’s slowly filling up a bar, and you unlock new buildings and technology as that progresses.” The followers undertake tasks for you as well, like cooking, to name one example.

Other games referenced in our discussion include Don’t Starve, Frostpunk, Oxygen Not Included and Moonlighter, but the studio is hoping to tighten all of Cult of the Lamb’s separate components into a compulsive little cult sim you’ll want to play forever. “The more distilled each part of it was, the better the whole thing came together,” Armstrong said. We’ll find out if it works some time in 2022 when Devolver Digital brings it to PC.