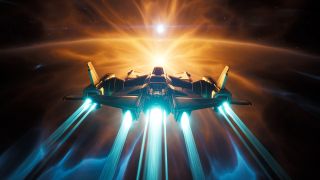 We said earlier this year that Everspace 2 “is close to being the new gold standard for space shooters,” which was especially high praise given that it was only launching into Early Access. It’s come a long way since then—an update released earlier this month added a huge amount of new content including missions inspired by the great 6DOF shooter Descent—and now you can get a taste of what it’s all about thanks to a new demo that’s now live on Steam.

The demo doesn’t have a time limit—you can play it as much as you want—but is limited to the first sector in Ceto, the game’s starting system, giving players access to the first five main missions and two side missions, and as many random encounters as you feel like taking on. If you really dig your adventures in space and decide to move on to the full Early Access version, any progress you’ve made in the demo will carry over. In order to ensure that aggressive grinding doesn’t throw things completely out of balance, players will be capped at level 5—although they can carry over as much in-game money as they want.

Developer Rockfish Games said it was able to release a new demo now because it recently split the base game into multiple individual PAK files, which enabled “a proper demo” that isn’t too big and can be easily updated, “but also cannot be exploited by unlocking the full game.” An earlier demo was taken down just ahead of the Early Access launch, “because it just didn’t do the current production state any justice.”

Word of the demo came as part of a lengthy update on the state of development, including comments on crunch (“We never ever crunch!”) and screens of the new Khaït Nebula.

“Every star system in Everspace 2 has a signature color and lighting theme,” Rockfish explained. “Khaït Nebula embraces the complementary colors purple and green with some sprinkles of blue—nothing revolutionary, but it simply works in terms of general color theme theory, but it’s also a great fit to highlight the system’s deeper mystery.

“Speaking of mystery, in addition to raising the maximum player level and adding a set of new player perks, the autumn update will also add several chapters to the campaign. This will not only reveal new essential secrets in the Everspace universe but will also put Adam Rosslin and his companions to the test, where their common cause is threatened by conflicting personal interests. We’ll have more to share about new gameplay mechanics in the Khaït Nebula later this fall.”

Everspace 2 doesn’t have a full release date yet, but Rockfish predicted that it would be ready to go 12-18 months after the January 2021 Early Access launch.