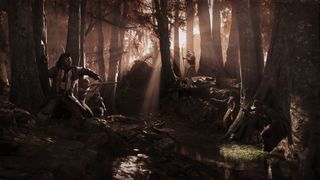 For the next month, Hunt: Showdown will be all about mastering the bow and arrow and heading into the Bayou in search of event points. In return, you’ll net yourself some new skins for the brand new in-game weapons and legendary hunters.

The new event ‘Light the Shadow’ just dropped in-game and brings a couple of new and highly-anticipated weapons to the fray.

First, there’s the bow. To unlock it during the event you’ll need to select the Pierce the Shadow path. During which you’ll gradually unlock the weapon itself, ammo types (poison, concertina, frag), the legendary Conversion pistol ‘Faultless’, legendary hunting bow ‘The Wayfinder’, and legendary hunter ‘The Exile’.

If you finish either path you can start all over during the event and get to work on the other.

To make any progress you’ll need to gather event points, which you can do through various activities around the map or by simply killing bosses and looting players like you do in any other match. There is a daily cap, mind, so you can’t get through the whole event in one day. Even if you really wanted to put yourself through that.

Also new in the Light the Shadow event are vapours. These are event-only items that boost points for you and your team and highlight pyres and wards that can score you even more points.

After the event is all said and done, you’ll be able to access the bow at rank 54 and the throwing axe at rank 1, as a variant of the combat axe. The rest of the skins will likely be locked off though, so you best get playing if you hope to nab one of those.