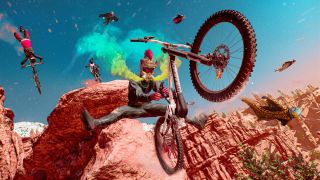 Riders Republic is essentially Ubisoft taking another stab at 2016’s Steep by cramming even more extreme sports onto an even bigger map. And that’s not a bad goal. I thought Steep was generally OK, if not all that memorable, and with biking and snowmobiling thrown in along with skiing, snowboarding, paragliding, wingsuiting (is that what it’s called?) and even jet-powered wingsuiting, it’s promising more stuff to do and a more massive place to do it.

There’s no shortage of races, that’s for sure. I spent some time with the closed beta this week, and the intro immediately shoves you through a dozen races to teach you how to do tricks on a bike, skis, and snowboards. You can guess the rest: rack up points with tricks like rail slides and backflips, complete challenges (like performing a certain trick, finishing under a specific time, or winning the race on a higher difficulty), and you earn cash and stars, which let you progress to better gear and more events. Naturally there’s a microtransaction store to buy additional outfits and skins.

Once you’ve got some stars under your belt you’re finally let loose in the open world, where you’ll find even more races dotted around the map, which knits together American national parks like Grand Teton, Bryce Canyon, Yosemite, Zion, Mammoth Mountain, and more. Snowy mountains, arid deserts, lush forests, cliffs and valleys, rivers and waterfalls, pretty much any terrain you’ve dreamed of doing extreme sports on, over, or through, you’ll find it here, and it all looks pretty great.

The world at all times appears to be utterly crawling with other extreme sport enthusiasts (I think most are bots or player “ghosts”), so as you’re screaming down a mountain trail on your skis you’ll see wingsuiters zipping overheard and other skiers and bikers doing flips across your path. If you want to compete alongside other players simultaneously instead of just racing ghosts, there are 64-player “mass races” available every few minutes.

Mass races are super hectic, because while there aren’t complete collision physics at play, there is a bit of collision physics, which makes it hard to know when players will pass harmlessly through you and when they’ll suddenly jar you off course. It’s chaotic and ridiculous. I can’t even pick myself out of the crowd in the first 15 seconds:

I like the unpredictable races best. Jump into a race somewhere in the world, and sometimes it will have a theme: everyone will be in a dinosaur suit or wearing a giraffe costume or some other silliness. Some races will abruptly switch from skis to bikes and back to skis, or sometimes even a rocket-powered bike. It’s fun trying to adjust from going off a jump with a snowboard to suddenly finding yourself wearing jetwings and having to fly through hoops instead of grinding rails.

But within a few short hours of play, I got tired of just racing, even in a dinosaur costume. Thankfully, the Riders Republic map is friggin’ huge and enjoyable to explore, and once I’d unlocked the jet-powered wings by collecting enough stars in races and challenges, I flew off to find something else to do besides just an endless series of races. Here are a few new sports I made up along the way.

My favorite sport is to land on an especially tricky spot where there’s a landmark icon. Look for one on a narrow spire of rock or an unclimbable peak. And this is the important part: land on it perfectly with your very first try. It’ll make the rest of the sport more satisfying.

Once you’ve landed, click the icon to get credit for finding it, watch the cutscene (or skip it) and then just hang out on the spire for the next few minutes and watch as dozens of other players (or perhaps their ghosts) try and fail to land on it, too.

It’s a good time! The players will mostly miss the landing, leaving you to listen to their avatars yell out in pain and frustration as their bodies sail through the air and collapse on the ground with a crunch. You can see what I mean if you turn on the sound in the gif below.

I’m definitely not the only one playing this sport, because no matter where you are in the world you’ll see other people using completely inappropriate sporting gear for the environment.

On top of the tallest mountain on the map covered in two feet of snow? Perfect time for a bike ride. Snowmobile down a river, or better yet, up a river. Are you in the desert? Sounds like it’s time to do some skiing. Did you find a small wooden halfpipe? Time for the snowmobile again. It always leads to wiping out in horrible ways, but watching yourself ragdoll down a mountain after trying to jetwing under a bike ramp is a reward of its own.

I’m as big a sucker for collectibles as the next person, and there are a few collectibles I plan to complete when Riders Republic launches in October, like visiting all the landmarks and finding all the hidden gear drops.

But I have to draw the line somewhere, and I found out where. I’d spotted some little shiny mylar balloons here and there around the map, and I finally drove through one while on my snowmobile. The balloons are collectible, and if there were maybe 50 or 100 scattered around the map I’d try to find and pop them all. But there are 500 mylar balloons. 500!

That’s just obscene. Maybe there’s a great prize for finding and popping 500 balloons, but just imagine the grind. Imagine being at 479 balloons and knowing there are still 21 of them out there on that massive map you’d have to search inch by inch. No way.