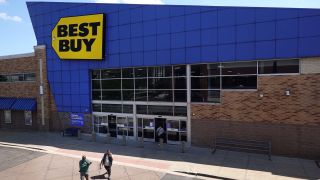 A major restock of Nvidia RTX 30-series graphics cards is happening at Best Buy stores across the US tomorrow, August 26, 2021. The drop will include highly sought-after graphics cards such as the RTX 3080 Ti, RTX 3080, and RTX 3090, so pay attention weary PC builders.

The GeForce graphics cards are limited to one per customer, notably not one per SKU, and only available at certain locations. That will hopefully ease a little of the mad dash to checkout that we’ve come to expect with online retail this past year. That said, I do suspect we’ll see a few arriving at the break of dawn for a chance at a new GPU, so don’t dawdle if you hope to be among them.

There will be no RTX 3060 12GB stock according to this information, though.

Best Buy is the retailer of choice for Nvidia Founder’s Edition graphics cards, so it’s assumed that’s what you’ll find in-store tomorrow. The aforementioned leak also suggests that’s the case, but Best Buy has not confirmed this on its website.

In order to get your hands on one, you’ll need to be an early riser. Staff will begin handing out tickets that guarantee you a graphics card on the day from 7:30am, and the store will open from 8am. That’s all local time, depending on the store in question.

Once the tickets are all distributed and the graphics cards accounted for, that’s it for this round of restocks. God speed.