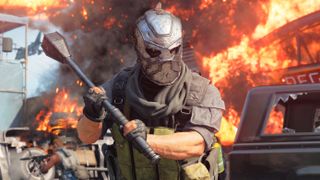 Call of Duty: Warzone has a cheating problem. Activision has banned literally hundreds of thousands of accounts since 2020, but that typically won’t stop a cheater for long: Warzone is free-to-play, so when a cheater is banned, it’s a simple matter to make a new account and get back to business.

Activision said during the official unveiling of Call of Duty: Vanguard last week that a new anti-cheat system for Warzone is in the works and expected to go be rolled out later this year when the new Warzone map goes live, but as we noted at the time, it can’t come soon enough: Enthusiasm in the game appears to be sagging, at least in part due to rampant cheating and Activision’s inability—so far, anyway—put a meaningful dent in the problem.

The wheels may be turning on that process faster than we expected: A Tiktok user named rushman360 said in a video posted earlier this month that he’s been hardware banned, meaning that Activision has locked his machine out of the game, no matter which account he uses. He can no longer access any of his accounts, or even make new ones.

“Every one of my accounts are banned,” they said. “Every single one, without even me playing it. Playing the new accounts, they’re banned, so they hardware banned my shit.”

Activision actually confirmed earlier this year that it uses hardware bans “against repeat, or serial, cheaters,” but these aren’t always effective. A hardware ban targets the system you’re playing on rather than individual accounts, which as we explained in April is difficult—but not impossible—to get around. Some cheating programs will spoof your hardware ID while they’re running, so if you do get hit with a hardware ban, it’s not actually your hardware getting the chop.

That may be what happened here: According to Charlie Intel, the cheating site rushman360 was using may not have launched its hardware spoofer properly, resulting in the effective hardware ban. Rushman360’s “guarantee” that “there’s no more cheating in Warzone” is almost certainly overstated, especially since there doesn’t appear to be a sudden spike in ban reports in the Warzone subreddit, but this could also be an indicator that Activision is in fact getting a handle on the cheating situation.

Predictably, Activision played the whole thing close to the vest, and neither confirmed nor denied the report of effective hardware bans. “We are continuing to target repeat offenders, as we’ve previously stated,” a spokesperson said in a statement. “We’re evolving our programs to ensure repeat offenders do not re-enter Warzone.”

Interestingly, a report last week also claimed that Warzone account sellers are running short of stock thanks to tighter security restrictions that have made it harder to steal and resell accounts.