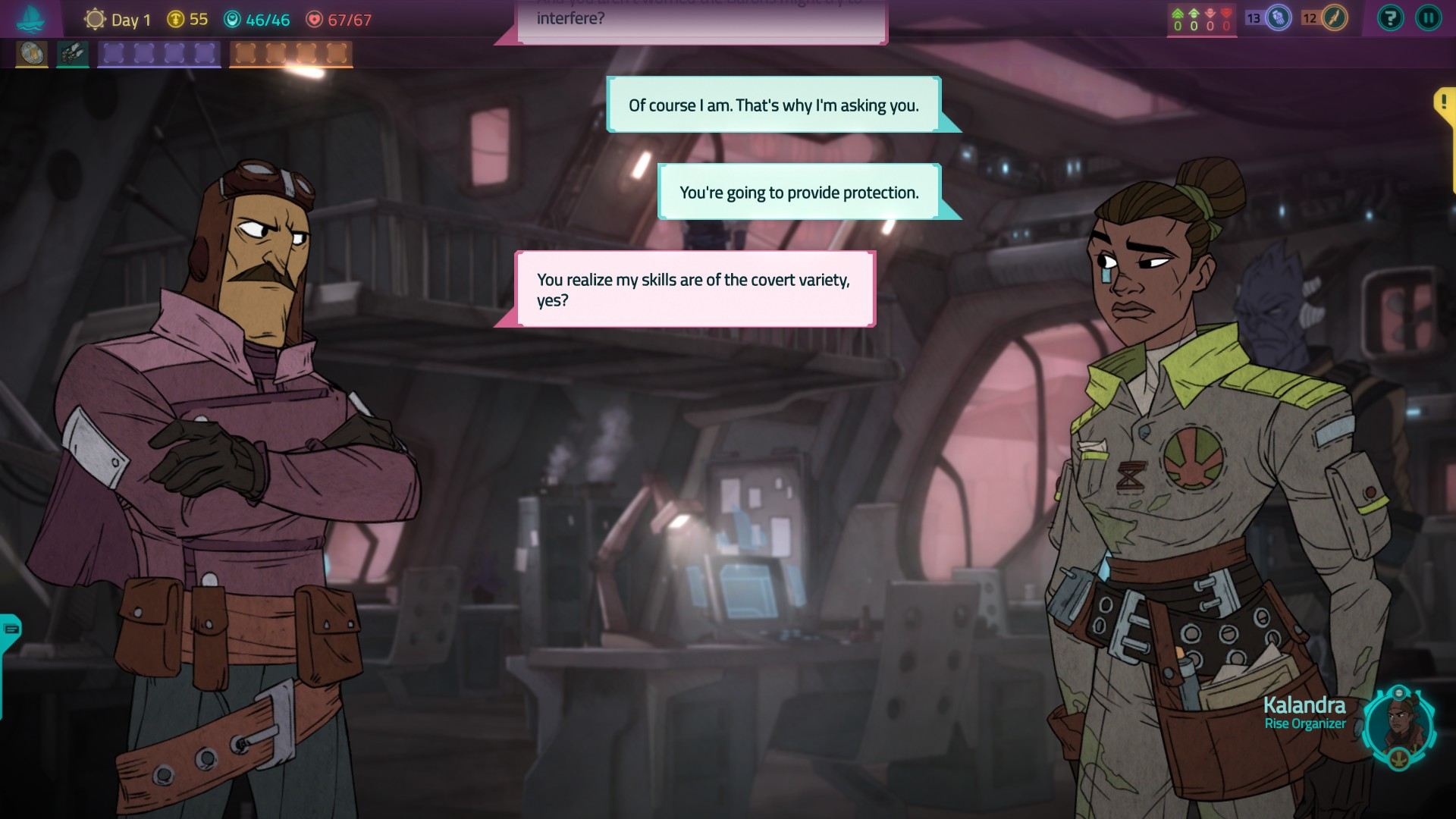 Games have always been looking for ways to make conversations as compelling as the combat. Why can’t a tense negotiation feel as gripping as a tough-as-nails boss fight? That’s the question Griftlands seeks to answer. It makes for a compelling roguelike, thanks to great writing and characters, but doesn’t quite live up to the promise of its chatty deck-building systems.

The titular Griftlands are a chaotic place where corrupt law enforcement and criminal syndicates run things against a backdrop of sci-fi and fantasy. Brutal it may be, but it sure is pretty. I love the scratchy, hand-drawn touch to everything. There’s a smart economy to where the embellishments are made, which ensures the game can deliver on its scope without any rough edges. Character sprites have lovely gestures and expressions that compliment the writing, while the overworld map is simply littered with tidy icons.

Griftlands’ factions are written in broad caricature, in line with the game’s cartoonish look—but there is always a serious undercurrent of skepticism about the status quo. Criminal gangs prove virtuous, while the local police prove to be the most ruthless of all. In this way, developer Klei paints a strong picture of the world you step into as a ‘grifter’, the game’s shorthand for a smooth-talking mercenary. There are three to play as, each with their own story, but only one is unlocked to start with—Sal, a once-indentured slave now on the hunt for the woman who sold her.

Revenge is hardly a novel motivation, but Griftlands shines thanks to fast-paced dialogue that fleshes out its characters effortlessly. What a relief it is to play an RPG that doesn’t involve scrolling through paragraph after paragraph of guff that happened 1,000 years ago. There’s an immediacy to Griftlands, in both the world-building and the stakes: Life’s short, only what’s in front of you really matters.

Even the smallest of characters get a chance to make an impression, as you collect an arsenal of subplots en route to your overarching goal. The writing can be damned funny too, the humour emerging from Sal being just a tad smarter than most of the other thugs she encounters (but not that much smarter). There’s a charm to these cutthroats, who are often acting out of sheer desperation rather than any kind of malice. It’s a world of opportunists, as you’d expect, but there are surprising moments of loyalty and kindness too. For me, the allure of Griftland’s story was far greater than that of its expanding deck-building.

There are two modes of play: battles and negotiations. Battles are turn-based affairs where you draw cards for attacks and abilities, and can earn or hire party members. Overall, they’re fun but conventional. The negotiations are far more interesting. There, your cards are used for building arguments against your opponent. You’re constantly looking to chip away at your enemy’s smaller points, while piling damage onto their core argument. I really felt like I was juggling a lot of plates, in the best way—the pressure always on to make the most of each turn.

As an abstraction, it’s captivating—but Griftlands never quite bridges the space between the actual dialogue and the card game in which debates take place. Compared with something like Signs of the Sojourner, which much more cleverly uses its mechanics to shape and fuel character interactions, Griftlands feels a little awkward. Negotiations are disconnected in a way that turns every interaction into a simple binary of success or failure. I wish I could see the impact of my chosen cards on my relationships or the story.

Worse, committing to negotiation decks will punish you during the game’s handful of inescapable combat encounters. There are side activities to help but in general, focusing on combat decks is the easier path through the game.

Griftlands does make good on far-reaching consequences. Recurring NPCs pop up in unexpected places, leading to tough spots where you might have to contemplate a double cross to achieve your goals. These are also randomised for subsequent runs, to an impressively varied degree—ensuring new runs feel reasonably fresh and that softens the blow when you do die.

You can get a boost on your next run, too—but there’s only so much of the sting it can take away, and despite the convincing way side missions are generated, the main story remains the same. Failing close to the finish line is never not going to take the wind out of your sails. There is a Story Mode setting for those who want to focus purely on the writing, but it feels like a band-aid on some harsh difficulty spikes. I was coasting through the game for the first two days, and then out of nowhere comes a fight several orders of magnitude tougher than anything preceding it. It might make narrative sense, but it’s not very interesting to keep restarting and bumping into walls like these.

Shortcomings aside, Griftlands is another slice of low-key brilliance from developers Klei. Is there a genre they can’t do? The balance of narrative and deck-building made for a much more engaging experience than I often have with card-based titles, even if it feels like more could be done to connect those systems and bolster the storytelling. Still, I’m going to remember my adventures with Sal and the little moments of friendship and betrayal throughout each run. I like playing as a grifter; it ain’t much but it’s a living.