Hot News Oculus Quest 2 is back on sale in Australia, and it's cheaper too 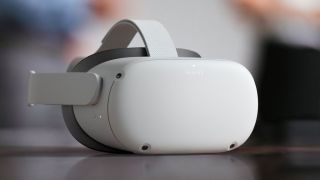 Facebook pulled Oculus Quest 2 from sale last month to address complaints of adverse skin reactions using the VR headset. When you’re wearing a chunk of technology on your face for extended periods, it’s not great when it makes you itch. The issue apparently only affected 0.01% of users (that’s according to Oculus) but it prompted the company to issue new silicone covers free of charge to any current Quest owners who wanted one.

Anyway, the voluntary recall has ended and the Oculus Quest 2 is now available again on Amazon Australia. Not only that, but it’s a better deal too: the entry level price of AU$479 will now get you 128GB storage, whereas previously it’d get you only 64GB. That’s probably annoying to people who own the 64GB model, but if you’ve been waiting to get the headset now’s a good time.

As for the 256GB model, that’s yet to return in Australia, though when it does it’ll still set you back AU$639.

Aside from the whole face itching affair, and the fact that you need a dreaded Facebook account to use it, we consider the Oculus Quest 2 the best VR headset in 2021. You can use it with your PC, or you can use it completely untethered, meaning it’s the most widely accessible of the lot. Cheap, too.

Leave a reply "Hot News Oculus Quest 2 is back on sale in Australia, and it's cheaper too" Cancel reply

Related Post "Hot News Oculus Quest 2 is back on sale in Australia, and it's cheaper too"