Hot News What Assault Rifle Golf is in Warzone, and how it's changed 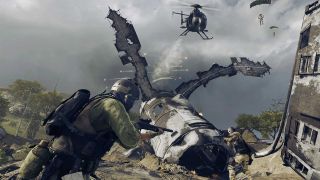 Looking for the new Assault Rifle Golf Warzone changes? There’s plenty to keep you busy now that Warzone Season 4 is here, so you may have missed the balance changes that are coming in a future patch. But in preparation, the FN-Scar 17—or the Assault Rifle Golf, to give the Modern Warfare weapon its blueprint code name—is one of the firearms to receive a buff.

The start of a new season is always a good opportunity to play around with different weapons—especially when most have had an overhaul. It may even be a good idea to revisit your favourite Warzone loadout and see if the latest changes have had any impact on your choice. But for now, here’s how the Assault Rifle Golf has changed in Warzone.

There are many weapon balance changes in Warzone Season 4, but here’s what affects the FN-Scar 17:

The patch notes also say: “We would like to avoid increasing the power level of a weapon to a point where we would need to reduce it shortly after in the following balance overhaul. With that being said, the Assault Rifle Golf (MW) may soon see another power increase in the near future, but we think an improvement to its average time-to-kill is a good place to start.”

Other assault rifles that have undergone similar changes are the AMAX, Groza, CR-56, and XM4.

The FN-Scar 17 generally isn’t a popular pick in Warzone. Its lack of accuracy at long range is what really lets it down, despite its high damage. Seemingly Raven’s intention with the future patch is to make more weapons viable, while giving players more of a chance to show their skill. The hope appears to be that the current weapon changes will help pave the way for that update. Also from the patch notes:

“We want to enable more escapes from impossible situations, moments of finesse, epic outplays, and opportunities to flex exquisite marksmanship. Due to some weapons being far more lethal than others in their class, we feel a reduction in the efficacy of those outliers is necessary. We expect these changes will bring the average time-to-kill up by approximately 60 to 100 milliseconds.”

There’s no mention of when the future patch will go live, but I’ll keep this guide updated as and when there’s more.

Leave a reply "Hot News What Assault Rifle Golf is in Warzone, and how it's changed" Cancel reply

Related Post "Hot News What Assault Rifle Golf is in Warzone, and how it's changed"