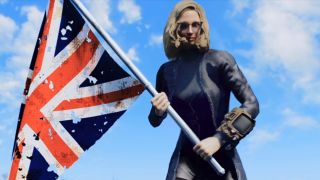 Back during this year’s faux E3, we said that the event’s best announcement was actually Fallout: London, a Fallout 4 mod that trades American shores for good old England. We’re still waiting to see if its impressive trailer can make good on its promises of cockney mutants and whatnot, but evidently Bethesda is happy enough with the project to hire the writer.

The Fallout: London team announced last Friday that head writer Stephanie Zachariadis has been hired as an associate quest designer for Bethesda.

“This is utterly fantastic news and something that all of the team here at FOLON stand behind, and we wholeheartedly wish her the best on her endeavours,” the statement reads. “We hope that she will give them the same groundbreaking story and quests that she gave us. Stephanie has been a pillar of support for the team and has helped create a fantastic and interesting main story and dialogue that we feel you will really enjoy. And we just know that she’ll be bringing these talents to the writing board of Todd [Howard] himself.”

Fallout: London is described by the mod team as a “DLC-sized” adventure set in 2237, and the team is doing a lot to distance it from the American-heavy lore of the base games. They’ve gone so far as to establish that Vault-Tec had no presence in the UK, and super mutants never popped up either thanks to the Forced Evolutionary Virus not being a thing there.

The Fallout: London team says that Zachariadis has completed “everything she needed to on her end.” The mod team says they’ll be hiring a new head writer, but they’ll be working under the assumption they’re completing remaining dialogue and not making quest alterations. The team’s creative director and project lead will coordinate things in the meantime.

Zachariadis’ biggest writing credit, according to her LinkedIn, is in fact the Fallout: London project, but she also wrote for the Fallout: Miami fan mod. She also sports several screenplay awards from various film festivals. Zachariadis won’t be contributing any further to Fallout: London, though, because Bethesda has a strict no moonlighting rule, especially for working on mod teams.

It’ll probably be some time before we see Zachariadis’ work fully incorporated into a Bethesda game, whether that’s in the Fallout universe, Elder Scrolls, or Starfield. In the meantime, you can get a taste via Fallout: London’s trailer. Personally, I can’t wait to have an irradiated scavenger explain to me what the heck “cream-crackered” means.