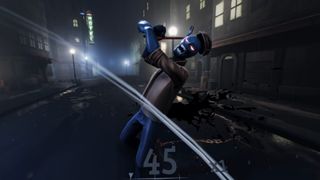 For those VR fans watching E3 hoping for tons of new trailers and exciting announcements, especially from big publishers and developers, well… there really wasn’t much to speak of on the main (virtual) show floors.

Even UploadVR’s E3 showcase wasn’t exactly bursting at the seams with new game announcements or major surprises, and there was really nothing along the lines of the AAA games from 2020 like Half-Life: Alyx or Medal of Honor: Above and Beyond.

But while it may be a slow year for VR (and it’s been a slow year for everything due to the pandemic)  there were several standouts that anyone with a VR headset should be interested in. Here are the most promising VR games we saw at E3 2021:

Survival adventure game Song in the Smoke wants to immerse you into a living, breathing world with realistic animal AI. You’ll craft tools and weapons, brew potions and make clothing, and engage in combat with melee weapons and bows. Animals will have different reactions to you based on their own status, so a hungry creature may approach you differently than one that’s recently eaten.

The noir rhythm combat game is like Pistol Whip with an edge. As mobs rush you, defeat them in time to the beats of the music with knives, guns, and other weapons, while dodging the axes and crowbars thrown your way. There are even big boss fights. There’s also a demo available now on Steam Next Fest for you to try out.

Another rhythm game, but this time a Beat Saber-like all about percussion. As drums flow through the air toward you (sometimes from different directions), strike them in time with the music with your virtual drumsticks. The game comes stock with 21 songs at launch and promises more to come It looks like a hard-rockin’ good time. There’s a demo for Smash Drums for Oculus Quest App Lab available now.

There’s no guitar needed to rock out with Unplugged, and if you’ve got an Oculus Quest you don’t even need controllers. With the Quest’s surprisingly good finger-tracking tech you can play high-speed air guitar with nothing but your empty hands. It will also work with Valve Index controllers.

The follow-up to the much-loved comedy secret agent puzzle game from VR’s earliest launch days. Players will don disguises, use telekinesis, and travel around the world to stop the evil villain Zoraxis in six new seated covert missions. If it’s anything like the original, it’ll be a funny and highly interactive spy thriller.