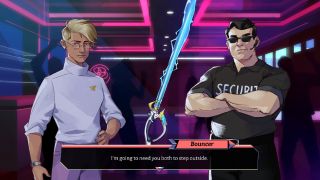 On release earlier this month, indie date-your-swords ’em up Boyfriend Dungeon landed itself in a bit of hot water over a content warning fans felt didn’t go far enough. Developer Kitfox would eventually update the warning, but the game’s launch issues didn’t stop there.

Boyfriend Dungeon’s release was marred by a week of discourse that saw many fans demand to be allowed to opt-out of the game’s more sensitive subjects—namely, stalking—entirely. Voice actor Alexander Gross, who played the antagonist at the centre of Boyfriend Dungeon’s uncomfortable themes, reported being sent hate mail for playing the character.

It’s unfortunate that much of this harassment didn’t come from the usual suspects, but from ostensibly progressive, queer players. But speaking to queer artists and game developers over the last week, that reaction wasn’t altogether unsurprising.

“When [Boyfriend Dungeon] came out, I watched a lot of streams of people enjoying the game,” a queer Kitfox employee who asked to stay anonymous told me via email. “People were having fun, but it was as if I was looking for something, looking for the moment where I was going to be told we did something wrong. And then that happened.”

The Kitfox employee stressed that their experience wasn’t universal to other queer developers at the studio. But it reflected an anxiety that came up time and time again in stories sent my way by queer developers, YouTubers, artists, and students over the last week. It’s an anxiety (backed up by what happened to Kitfox) that queer audiences can be particularly hostile to works made for them.

“Existing as a queer person means growing up with trauma and pain,” Coats explained. “While it’s gotten easier, part of the queer experience is working through that trauma to accept who you are. Sometimes that leftover anger and pain gets misdirected at the very creators trying to make it better.”

Here’s the problem, really. There are enough tropes out there of queer-coded villains or tragic gay couples that many queer players just want to see themselves represented in safer, more uplifting stories. There’s value in seeing stories where we just get to exist, without reliving very personal pains over and over again.

But creating honest queer art often means reflecting and unpacking what queerness means to the artist—no matter how messy it may be, or where it may rub against other parts of the community. Coats tells of a response from a trans fan who was frustrated with the presence of a drag queen in the game’s cast – after all, drag has long been conflated with transness in messy, uncomfortable ways. But drag is a key part of Coats’ own view of queerness, one that felt too essential to omit.

“For as inclusive as we’re trying to be, at some point we had to say, ‘Look, if drag queens really bother you, this isn’t the game for you.'”

Many developers I spoke to shared an anxiety over how their particular views of queerness would be met by wider audiences. Anecdotes of comments and messages from fans who felt that their representations of marginalised identities weren’t “correct” because they didn’t map to the commenter’s own experience. Bisexual developers slammed as biphobic for not conforming to a specific kind of bisexuality.

This kind of response goes well beyond games, of course. Independent queer artists and filmmakers have been dealing with similar backlash for decades. Without the PR departments and marketing agencies of bigger studios, queer developers felt they were “more approachable” to aggrieved fans (from all sides of the political spectrum). When you’re using a personal Twitter account for self-promotion, it’s hard to leave those comments at work.

That accessibility ends up holding smaller, marginalised devs to impossible levels of scrutiny, the Kitfox developer explained. “The standard is so different from non-queer media, that even if we stay on the subject of stalking, you can click to watch Jessica Jones or You on Netflix and there’s no content warning at all.

“I thought about smaller creators that wouldn’t be able to take a hit like this, I thought about creators who want to make games about their personal traumas or experiences, that deal with difficult subjects. Are we not going to be able to talk about this stuff? Or what is the alternative? Sanitize our work?”

Developers I spoke to shared a common anxiety over tackling these personal themes in games. Boyfriend Dungeon isn’t a heavy game—it’s a game about flirting with medieval weaponry, after all—and even took care to launch with content warnings, even if they weren’t quite up to scratch. But the simple presence of a touchy subject like stalking saw such strong backlash that it’s given plenty of developers pause.