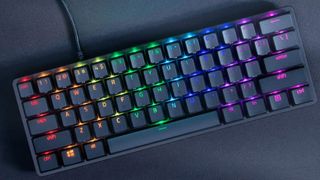 If a large or even regular size gaming keyboard is cramping your style, then a so-called ‘tenkeyless’ (TKL) plank might be more up your alley, provided you don’t need a dedicated number pad. And if that’s the case, few keyboards are more compact than Razer’s Hunstman Mini, which is on sale at Gamestop for $77.94 right now.

In case you missed it, Gamestop recently added PC gaming hardware to its product catalog, including full fledged desktops, laptops, components, and peripherals. That means there is another source for deals and, in this case, the Huntsman Mini is marked down $42.05 from its MSRP.

Granted, it doesn’t usually sell for the full MSRP, but this is the lowest price around. Amazon, for example, has it on sale for $102.99. Gamestop also offers free shipping on orders of $35 or more, of which this qualifies.

In our Huntsman Mini review, we praised the compact plank for its responsive opto-mechanical switches that use light beams to register keystrokes, which are fast and typically require less force than most mechanical switches, with quicker actuation and absolutely no debounce time.

As purely a compact gaming keyboard, it’s a great option. The Huntsman Mini is 60 percent the size of a regular keyboard, as it trims off the number pad and row of function keys for a smaller footprint. The function keys and media controls serve as secondary controls that are side-printed on the PBT keycaps.

Having fewer keys takes some adjusting to, though, so that’s something to be aware of if you’re looking for a daily driver for both play and work. That’s really our only gripe. Well, that and the MSRP, as you’re paying a premium for technically less keyboard. This deal takes care of that concern, though, and then some.