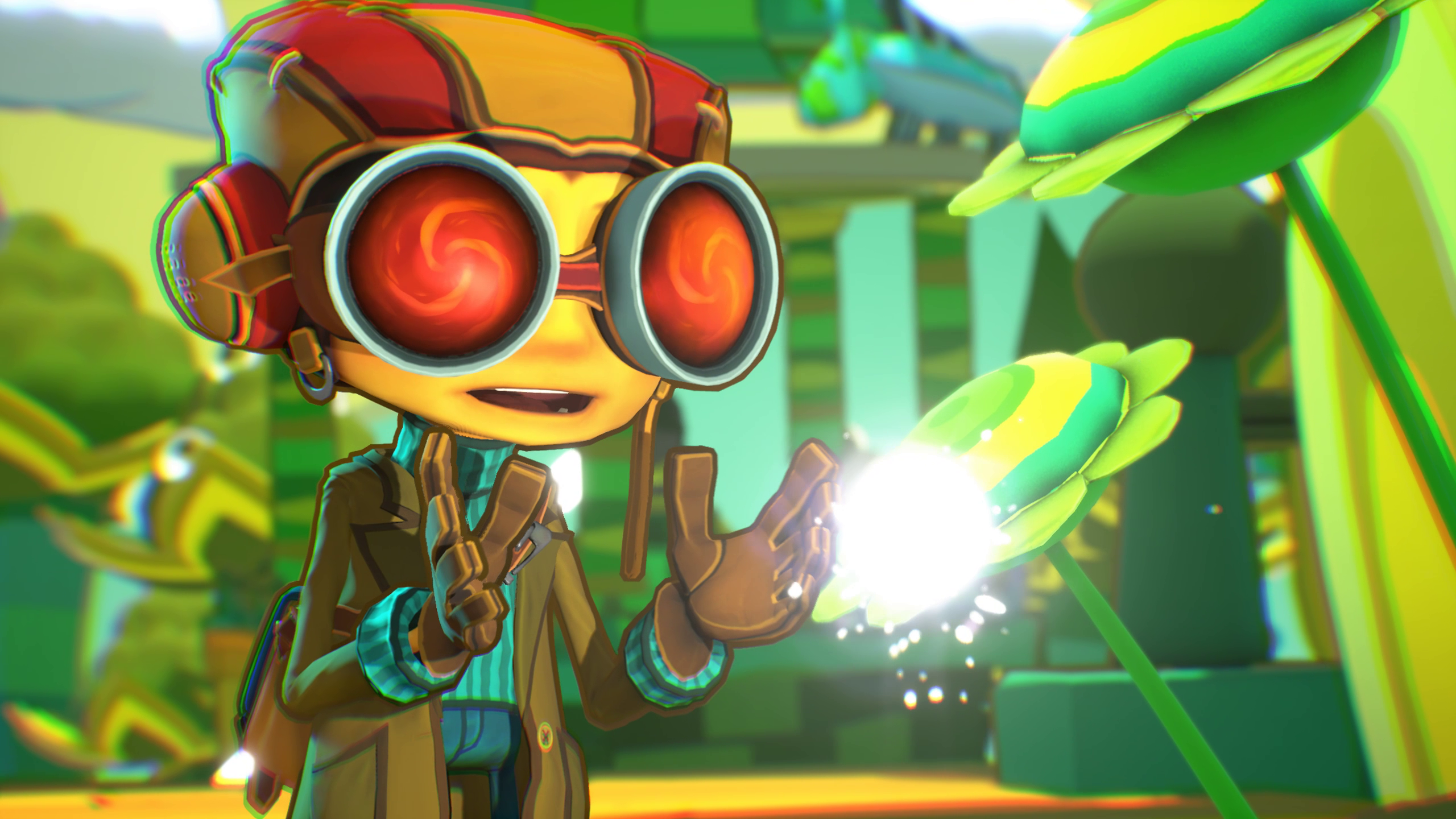 You can tell a lot about a game’s soul by what it deems a ‘perk’. Fallout 3, for example, thinks being better at murdering women is one. In Modern Warfare it’s dropping a grenade after death like a smug ghost. In Psychonauts 2, Double Fine will sell you a ‘beastmastery’ pin badge modifier that allows Raz’s psychic fist—usually used for thumping and tossing—to stroke woodland animals. You spend money to hurt fewer things. Another pin makes him groove when left unattended; dance like nobody’s watching, when no one is playing. Honestly? It’s a tonic.

As headlines go, “Tim Schafer game favours silliness over sadism” is hardly a shocker. But it’s been 15 years since the original; time enough to forget how silly Psychonauts can be, and the startling places those jokes can take us. Of course, for the game’s inhabitants, it’s been but three days: wannabe Psychonaut Raz left Whispering Rock Psychic Summer Camp on a rescue mission—seen in VR spin-off Rhombus of Ruin—and we rejoin him in its aftermath. A video fills all that in, but first-hand experience is recommended given the juicy callbacks throughout.

And what a start: a Mission Impossible-style con to fool a villain inside his own mind, only for a dental fixation to infect the plan. With its heroes’ power to enter and influence the psyche, I always thought Psychonauts did the Inception thing long before Inception, and this ESPionage only hammers the similarity home. Of course, Psychonauts doesn’t settle for a dreamscape as humdrum as a rotating hotel corridor. Here you’re riding molars, zapping tooth fairies and descending throats. It slips down the gullet of this returning fan just as easily.

Fundamentally, not much has changed since 2005. OK, it has an eye-searing prettiness that comes from an extra 16 years of HD knowhow. But under levels that are variously knitted, hand drawn or printed on x-ray film you still sense familiar cogs. It’s another throwback to the 3D mascot platformers of the late ’90s. An explorable hub world siphons you into standalone levels, all festooned with enough collectibles to give even Banjo and Kazooie cold sweats.

The hub is now Psychonauts HQ, which feels like The Incredibles and The Muppets chucked in a blender: its workforce of potato-faced oddballs spitting zingers, while stirring music and retrofuturistic decor sells you on the group’s grand mission. After 15 hours I still regularly fast travel to the atrium just to get a hit of its swelling theme. Composer Peter McConnell does incredible work throughout the game, turning his hand to more genres than some might tackle in an entire career.

From there, Raz hops inside heads to unpick personal traumas that both infect and shape the mental landscapes. Picture Mario 64’s self-contained worlds, if Tiny-Huge Island was a metaphor for Wario’s impotence. On one hand they serve up the comfort food of those older platformers. You hoover up hundreds of imaginary figments and earmark hidey-holes to return to with later upgrades. It’s solid, standard stuff and will keep completionists happy for 20 hours. But levels are much more than obstacle courses to tidy up.

Every mind tells a story. And not in the hackneyed language of audio logs and ten foot-tall ‘HELP ME’ graffiti. This is level design as exposition. For example, one man’s familial alcoholism becomes a toxic swamp where his shame manifests as a riverbed of discarded gin bottles that you navigate before booze drowns them again. Another standout sees a bureaucrat’s clinical hospital of a mind hijacked by a casino. Exploring pill-filled pachinko parlours is a visual spectacle and can be appreciated as that, but the metaphorical dimension is just as satisfying to decipher.

Crucially, there’s not a tired genre trope to be found. Sick of slippy-slidey ice worlds? Try a level set on the wedding cake of a now-mourning widower. You don’t see that in Crash Bandicoot (though I’ve not played ‘The Wrath of Cortex’, so apologies if I’m misrepresenting its psychological nuance). I love the segment that revisits a relationship in an aging, fractured mind, each memory getting jumbled with the host’s stints as a barber, mailman and bowling alley attendant. It’s wistful and tragic, all while conjuring disasters from human hair or a vortex of unread love letters. Weirdly, it also makes Psychonauts 2 a good companion piece to Yakuza: Like A Dragon as a tale about the turmoils of an older generation than tends to hog the gaming spotlight.

This maybe paints Psychonauts 2 as more dour than it is. This isn’t one of those heart-on-sleeve misery fests you sagely nod at while secretly wishing you were playing Peggle. This is a game where you explore a shoe while bacteria shriek about an antifungal extinction event. The best levels still flip the rules as the original’s did. One mind’s an archipelago explored like a miniature Wind Waker; another, a cooking show that becomes a parody of Overcooked as you race to feed whooping strawberries into a blender. I’m not sure anything tops the first game’s Milkman Conspiracy, but hearing an egg boast about its own execution comes close.

At moments I wonder if Tim Schafer, as the game’s writer, is playing a kind of game design Whose Line Is It Anyway?, drawing random words from a hat and attempting to roll with it. What advice would Shakespeare offer Raz? How does a country’s military history sound sung as a chirping Disneyland ditty? Got any gags about funicular railways? Amazingly, these are the boring questions. In the game’s most audacious comic set piece you’re given an entire brain to rewire, with every possible combination of thoughts resulting in a punchline. It’s a literal joke factory, and I can only imagine the dark nights of the soul spent making every combo zing.

I’d go further and say that as you wander the overworld and chat with fellow ‘nauts it begins to resemble a lost LucasArts adventure. The puzzling is more physical, driven by Raz’s evolving psychic abilities, but the number of weirdos you get to converse with, mining their dialogue trees for every last laugh, paints a world as vivid and alive as a Rubacava or Mêlée Island. I’m head over heels for The Questionable Area, a daft hit of tourist trap Americana where you half expect to bump into Sam and Max, such is the powerful oddness of its rickety attractions.

One downside to the newness is that I miss the Whispering Rock gang. Bar Raz’s (maybe) girlfriend Lili, none of the kid cadets make the trip, and their replacements, Raz’s rival interns, don’t have the same impact. Their shared standoffishness blurs together, and the story sidelines them after a fantastic first act. That opening stretch does such a good job establishing characters and stakes, and delivering a payoff (honestly, it’s like a Pixar film in a game) that it doesn’t leave those relationships anywhere to go. Well, aside from offering mundane side missions—a plodding bit of zig in a world that always strives to zag.

It’s a rare moment of untapped potential in a sequel that improves on its predecessor in almost every regard. Just the act of moving makes it easier to recommend. If Raz entered my mental scar tissue he’d find the platforming from Psychonauts 1. Part of me never left the Meat Circus. In 2021 Raz is responsive, his rope and pole gymnastics are no longer a mess of button presses and the camera has your back, or whatever side you want it to have. Throw in generous checkpointing and no life counter and it’s as responsive and welcoming a 3D platformer as you’ll see outside of Nintendo.

Combat is likewise revamped, with an easier dodge roll and dollop of autoaim that unlocks the potential of psi powers I found too fussy in the original. Just being able to telekinetically lob scenery without wrestling with throwing arcs makes for rambunctious rumbles from the outset. And there’s more enemy variety this time as flying imps, mine-laying sprites and gavel-wielding judges give individual fights a distinct flavour and ensures every ability has a chance to shine. Remapping powers is still a faff, but if that’s the price of meaningful brawls, so be it.

Given how Double Fine spruces up the thrashings it’s perhaps surprising how stingily it rations them out. Fights are rare in most levels—non-existent in the hub world—which makes a new upgrade system slightly superfluous. It’s hard to get excited about nimbler lobs when you use them so infrequently. It makes post-credits play particularly strange: you’re essentially returning to empty worlds to push up your cadet rank and buy upgrades and power-ups with no enemies to use them on. It’s just you and a whole lot of squirrels to scritch.