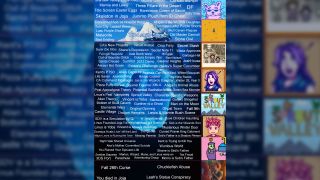 Looking up conspiracies, theories, and hidden lore for video games is a lot of fun, and Stardew Valley is a game that has a lot of secrets. I once considered myself as someone who was pretty clued-in to the game’s shenanigans. I’ve collected most of the secret notes, discovered Mayor Lewis’ lucky purple shorts, found the secret statues, and have happily discovered all the clickable antics on the game’s home screen.

But everything I thought I knew about Stardew Valley has been nothing in comparison to this Stardew Valley fandom iceberg I spotted on Reddit created by NunchuckDLuffy.

The iceberg image has been used in fandoms everywhere online to visually represent the iceberg metaphor, the top being casual information with the bottom being wild conspiracies and hidden knowledge only known by uber-fans. With the Stardew Valley iceberg,  what surprised me the most about the image is just how packed it is. When I first saw the picture, I recognized some of the theories and lore from the first couple of tiers, but anything past tier four was completely alien to me.

After Googling the snippets that caught my attention, I’ve put my favorites below, including hidden in-game lore written by ConcernedApe, fan theories founded by in-game evidence, and some of them (and, in my opinion, the best ones) complete conjecture from fans. Look forward to inter-family drama, ghosts, curses, dragons, and raging wars. And here I thought I had been playing a relaxing farming sim this whole time.

This one is a pretty popular fan theory and has enough in-game evidence that it seems believable, although it’s not been confirmed by ConcernedApe. As you become friends with Stardew Valley’s Wizard, he reveals that he has reason to believe that one of the Pelican Town locals is actually his daughter. Pelican Town has its fair share of drama but this information is the motherlode of small-town gossip, and fans believe that this mysterious daughter is Abigail.

It makes total sense as Abigail couldn’t be any more different than her parents. She has no interest in her father’s store and loves magic and the supernatural (like a certain cooped-up wizard we know). But, the most damning snippets that support this theory is that Abigail’s mother, Caroline, says she often took secret walks to the Wizard’s secluded tower, and not only that, at one point Pierre admits to the player that Abigail doesn’t look anything like him and wonders out loud if he is really her father.

There’s another fan theory at Jass being the Wizard’s daughter because of her Junimo colouring book and her natural purple hair (Abigail dyes her hair purple),  but Caroline and Pierre’s comments are pretty damning evidence.

Gunther is a pretty mysterious character in Stardew Valley. You can’t become friends with him, give him gifts, or really have any sort of conversation with him. There are plenty of other characters like this in Pelican town, NPCs you see at seasonal events and are talked about by other characters. But Gunther is different. He doesn’t attend events, go to the Stardrop Saloon in the evening, go for walks along the beach—you never see him outside the library. The fan theory ascribes this to the fact that Gunther is actually a ghost and his soul is bound to the museum.

I really like this theory because when I thought back to my hours of playing, I never really noticed it before. Fans have pointed out that the two children, Jas and Vincent, mention him to the player but the idea that in ghost stories children have a stronger connection to spirits makes the theory work. I love the idea posed by fans that he’s haunting the library because of his collection being “unfinished business”.

The theory here is that Linus is secretly super rich from being one of the founders of JojaMart (alongside Morris), but because of the guilt and shame of opening an evil corporation, he left his life to live in the wilderness. After becoming friends with Linus, he tells the player multiple times that the reason he lives in a tent is that he wants to, it’s his own choice. His self-seclusion is because he likes to be at one with nature and that he wishes the town’s folk would accept that.

But even in his squalor, fans have spotted that Linus can offer players money for certain items, sometimes offering thousands, so where is he getting that money from? The theory says that this money is what’s left from when he owned JojaMart. This is where the theory comes from, and I think it’s a fun one.

Watching the TV in your Stardew home can be a great way to learn useful tips, with one show titled Livin’ Off the Land giving you some incredibly helpful information for when you first start farming. The theory here is that the old man that presents the programme is actually your dead grandpa and the tv channel is showing reruns of his show from when he was alive. There’s no evidence, but I think this theory is really sweet, and fans describe this theory like your deceased Grandpa is giving you farm tips from beyond the grave.

This one is a quickie, but I’m still not over the fact that there are confirmed dragons in the Stardew Valley universe. In the 1.15 update, ConcernedApe introduced a new item called a Dragon Tooth that can be gathered in the Volcano Dungeon or through cultivating stingrays in your farm’s pond. The existence of dragons in Stardew Valley is not even a theory but a straight-up in-game fact, and that’s pretty nuts to me.

I’m going to roll a couple of the iceberg snippets into one section because they all tie into Stardew Valley’s lore, which is all official and created by ConcernedApe. Stardew Valley is situated in the Ferngill Republic, a nation that is at war with the Gotoro Empire. We know this because Kent is a soldier who fought for the Ferngill Republic and (when you earn enough friendship hearts with him) reveals that he is a survivor of a Gotoro prison camp and suffers from PTSD. I always forget this snippet of info when playing, everything in Pelican Town seems so peaceful and none of the characters really mention the war.