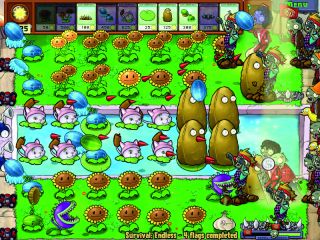 With Age of Empires 4 and Company of Heroes 3 on the way, it seems reports of the death of the RTS were greatly exaggerated. The retro FPS comeback is ongoing, as is that of skateboarding games. CRPGs and even FMV had their turns, and the point-and-click adventure before that. What unfairly forgotten flavor of videogame should rise from its grave next? Vehicular combat games maybe, or rhythm games with peripherals? Lane defense games or rail shooters? Do you want Riders Republic to usher in a new era of extreme sports anthologies? Is Splitgate bringing the arena shooter off life support? You tell me.

What ‘dead’ genre deserves a comeback?

Natalie Clayton: Here, whatever happened to sci-fi racers? Y’know, your WipeOuts, your F-Zeros, or (if you were an unfortunate Xbox kid like myself), your Quantum Redshifts. Games that took the best bit of Star Wars: Episode 1 and turned it into a screaming fast genre of ridiculous spaceships tearing around winding tracks at thousands of miles per hour. They kinda faded away in the mid-00s, but in 2021, unrestrained by technical limitations, imagining these games coming back faster, bigger, and more stylish than ever gives me goosebumps. C’mon, game developers. Give us the Redline tie-in we deserve.

Evan Lahti: A few years ago I would’ve said skateboarding, but as Natalie will also tell you, that’s well in hand.

Probing deep into my past as a boomer (I’ve recently learned that this means anyone who was alive in 1995, despite my dad being an actual baby boomer), I recall two generations of outstanding educational games, stretching into the early 2000s: Carmen Sandiego, Pajama Sam, 3D Dinosaur Adventure, The Oregon Trail, Odell Lake, Nancy Drew, 3D Moviemaker, and excellent The Island of Dr. Brain. Is there anything even close to this in 2021? What’s the state of educational games right now? Something we should write about, perhaps. Steam’s “Education” tag is unhelpfully cluttered with Dark Souls, Total War, and a bunch of Noun Simulators. My impression is that everyone’s kids are just playing Minecraft, Roblox, and other widely-available games.

Less academically, I guess we also don’t have as many “movement shooters” as I’d like right now. Does Slipgate qualify?

Wes Fenlon: The Easter Egg game, or the game-within-a-game, may not exactly be a genre, but I love them, and feel like they’re fairly rare in modern games. The ones I’m thinking of were often accessed via a secret code or buried in a sub-menu and seemingly just made by the developers for the hell of it, when inspiration (or procrastination) struck. Maybe they’re not as common today because devs wisely figured out they could just release small, arcadey games on Steam for a few dollars, which wasn’t an option when everything shipped on discs.

I only remember two things about Xbox racing game Project Gotham Racing 2, for example: that your score was measured in “kudos,” and that the original Geometry Wars was a minigame you could play in your garage. But the king of Easter Egg games is Destruct, a secret strategy game buried within the PC SHMUP Tyrian. It has absolutely nothing to do with the main game and is ridiculously fleshed out, with multiple modes and 2-player support. My favorite weapon installation was the repulsor, basically a radar dish that could send incoming bullets careening off in another direction. I played a lot of Tyrian, but I might’ve played even more Destruct, splitting control of the keyboard with a friend. I haven’t played in years, but I bet it still holds up as a fun minigame. Tyrian’s free on GOG, so give it a shot.

Tyler Wilde: Back in the early 2000s, ARGs weren’t about cracking cyphers to uncover DLC plans. They were a new kind of standalone game that was actually going to layer a fictional reality over people’s lives, sending spooky faxes, calling their phones, and messaging them on AIM (remember those in case you’re ever on Family Feud and get ‘things no one does anymore’). The game that really helped popularize the concept, Majestic, famously flopped, which is probably one of the reasons the idea never took off, but people still thought it was cool. PC Gamer itself said at the time that “when the concepts Majestic pioneered are rekindled in the future, we’ll remember it for inspiring a new direction for game developers.”

I guess that has kind of happened, just not in the way it was meant back then. I don’t think 2001 PC Gamer was predicting Sonic the Hedgehog becoming a Twitter personality or the extent to which endless seasonal updating would influence real lives. That angle doesn’t serve my point, though, so forget about it. What I’m thinking of is an earnest attempt at a new Majestic-style game. With smartphones being as powerful as they are and people having resigned themselves to having no privacy, you could probably do some pretty wild stuff. People might get mad if it’s too invasive, but you can always just say that the Twitter protest hashtag is all a part of the game. Also, someone should do the Peter Molyneux Cube thing again, except this time, the prize should be something actually good. Did you know that there’s no law in the US that limits the wattage of civilian-owned lasers? Just a suggestion for a place to start the brainstorming.

Andy Chalk: In 2017, our own Jody Macgregor wrote, “Immersive sims have been held up as the pinnacle of PC game design, but falling sales may mean the genre is endangered.” He was right on: From Ultima Underworld to Prey, some of the most well-realized, engaging, and surprising game worlds ever created have failed to catch fire with gamers—that is, they failed to sell. And it’s a simple calculus: No sales, no future.

I really thought Deus Ex: Human Revolution would make it happen. I really hoped that Prey would make it happen. But nothing seems to make it happen, and I don’t know why except that maybe most people just don’t have the time or energy to sink into that kind of demanding experience. Which isn’t meant to sound elitist, it’s really just an observation of fact: With all due respect to my esteemed colleague Jeremy, who in a column last week encouraged a more elbows-up approach to the genre, immersive sims really are best enjoyed as slow, quiet, exploratory treks through strange new worlds where, to paraphrase Sun Tzu, opportunity lies in the midst of chaos. That takes some effort.

I’d settle for one big, balls-out hit, but what I really want is a full-on re-emergence, including both long-overdue sequels to the great immersive sims of the past (looking at you, Eidos Montreal) and new games that really explore what can be done with new, more powerful technology. This is a genre that arguably peaked 20 years ago, and I think it’s about time someone did something about that. (And in the meantime, I have high hopes for Weird West.)

Lauren Aitken: Good BioWare games in the shape of KOTOR 3 only.