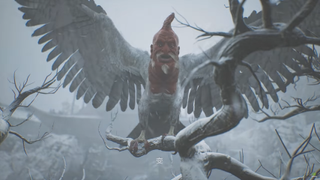 A new trailer for Black Myth: Wukong has the upcoming mythical action fest looking pretty good as it announces a switch to Unreal Engine 5. Shared by Nvidia on Youtube, the 12-minute slice of cinematics and gameplay shows off clear influences from other modern action RPGs, but definitely has its own thing going on.  Wukong seems great at not just dodging, but at using abilities that knock back and stun enemies—including some that seem like bosses.

The snowy trailer landscape is pretty definitely an impressive use of the engine and hardware tech, especially once a fight on an icy lake takes a few twists/ Later in the trailer, swirling leaves and lightning effects in caverns are also looking pretty good.

Inspired by the likes of Sekiro and the Souls series, Black Myth: Wukong takes as its setting the well-known Chinese myth of the Journey to the West. The creatures, people, and scenery are enticingly unfamiliar and even sometimes strange. Like the bird monster with a weird giant human head. I put that one at the top of the article.