Hot News Almost a decade after shutting down, Curt Schilling's 38 Studios is finally sending employees money it owes them 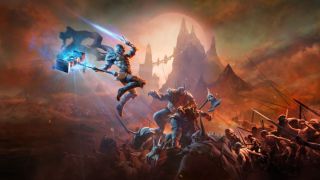 Nine years after Kingdoms of Amalur: Reckoning developer 38 Studios was unceremoniously shut down, some of its 400 laid off employees are finally receiving some portion of their final paychecks… sort of.

Bloomberg reports that former baseball player Curt Schilling’s company will pay “many” of its former staff members about 14% or 20% of what each employee is respectively owed, according to bankruptcy documents. When 38 Studios shut down and declared bankruptcy in 2012, it failed to pay its 400 employees their final paychecks before the studio ran out of money and shut down in May that year. Four years after shutdown, 38 Studios reached a financial settlement in court with the state of Rhode Island, which had loaned $75 million to Schilling (meant to support the studio’s projects for several years) through the Rhode Island Economic Development Corp.

One former employee told Bloomberg they had received their paycheck just this week, after payouts were determined in a Delaware court in June. Other employees reportedly told Bloomberg their checks had arrived at old addresses, since some had moved multiple times in the years since.

If you’re in the mood for a somber read, Jason Schreier’s latest book “Press Reset” dedicates a whole chapter to the 38 Studios/Big Huge Games shutdown and Schilling’s arc as baseball pro-turned-incompetent game studio manager. Schilling originally formed 38 Studios, a name that carries his jersey number, with the intent of developing the ever-elusive World of Warcraft-killer MMO, but development shifted to Kingdoms of Amalur: Reckoning after the acquisition of Big Huge Games. Despite generally favorable reception, Reckoning’s success couldn’t stop a freight train of financial ruin from hitting 38 Studios. In May 2012, Rhode Island governor Lincoln Chafee told media that he was working to keep the studio “solvent,” which prompted Take-Two executives to suddenly pull out of a publishing deal that was mere hours from being signed.

“All of a sudden, we were this toxic political mess that nobody wanted to touch,” designer Ian Frazier told Schreier.

As if company-wide layoffs weren’t bad enough, Schilling’s financial management resulted in many employees taking a hit to their own wallet for expenses the company originally said it would cover, including thousands of dollars in expense reports and mortgages 38 Studios had promised to assist with.

Although the studio failed to auction off the rights to its game in 2013, the game was eventually remastered in 2020 as Kingdoms of Amalur: Re-Reckoning.