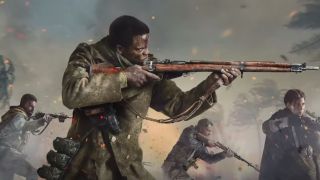 Yesterday afternoon Call of Duty: Vanguard was fully revealed by way of a Warzone in-game event. The Battle of Verdansk was shown off a few days ago, and much like last year’s Know Your History event, had players dropping into a special game mode to experience a little taste of what’s in store with the new COD.

It wasn’t a spectacular event, but it at least avoided what happened last time around in Cold War when everyone kept gunning down their fellow operators as they all tried to grab objectives from the same point of the map.

In the Battle of Verdansk, the whole lobby was on the same team, stripping away the griefer problem and allowing us all to band together for a single cause. Allies in war, brothers in arms, I dove into battle with my trusted auto-fill squadmate, Darth_Vaper, parachuting out of the plane in a group of 32 to take out a runaway train. And that was it. Genuinely, the event consists of a bullet-sponge train trundling through the south-west corner of Verdansk, with the mission in giant letters: “Destroy Armored Train”. There’s really not much else to it—it’s a giant, eight-carriage Nazi train, so you gotta blow the thing up.

As I hopped into my tactical rover (blasting “Africa” by Toto) for the ninth time in order to get a couple of rockets to hit the train, I couldn’t bring myself to hate the event. Unlike the Cold War event last year, I wasn’t ready to throw my hands up in exasperation and my controller out of the window in anger. It just didn’t feel like the most creative use of Warzone’s map and format.

The Outfield’s “Your Love” starts playing over the radio, and our rag-tag team of extremely highly trained soldiers start to make some real headway. A red banner flashes up on screen.

I was obliterated within seconds of this message appearing, my body flung into ragdoll mode as the angry choo-choo leaves my operator’s head on the other side of Verdansk. I respawned, landed on the ground ready to get revenge, and my leg was immediately ripped off by another blast from this comically large and sturdy train. Could trains in the 1940s withstand several thousand RPG shots and keep on moving? Maybe they could. I’m not a military train historian.

At this point, I was no longer bored. I was loving it. A train is tearing me limb from limb while 30 other people (and my mate Darth_Vaper) fire endless rockets at the bloody thing. I’m not going to let these locomotive fascists beat us.

Kim Wilde’s “Kids In America” was the last track on my vehicle’s rotation, and the train’s health is getting lower and lower. “We’ve done it,” I thought to myself, prematurely. No, another warning flashes up on screen, informing me that the train now fires cluster strikes. Reckon you’re going a bit overboard on decking out this train, Nazis? I guess the ticket collector just found them stuffed in the toilet cubicles.

Destruction rained down on us all as we tried to get that final little bit of damage. Thankfully, most of the turrets are gone at this point, so this absolute menace of a train with its anime-villain power level upgrades is close to tooting its last horn. I’ve been through it with that train. I was sort of sad to see it go.

The Battle Of Verdansk is a dull concept. Getting a bunch of people to shoot a train for ten minutes doesn’t hold much of a candle to Fortnite’s spectacle-laden concerts, as one comparison, but the sheer absurdity did make me chuckle. The cherry on top came when the ending of the event transitioned seamlessly into a full video advert for Call Of Duty: Vanguard. Now that’s COD, through and through.