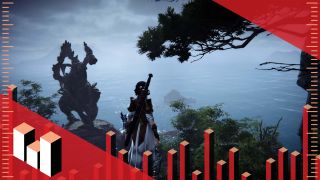 Beneath the slashing and clashing of metal in Naraka: Bladepoint, a wealth of graphics settings lie, waiting to be tweaked so you can be free to awaken the God within you. But only through perfect graphical balance will you possess the frame rates necessary to claim the immortality of the dead gods, while retaining the exquisite beauty of Morus Isles.

Of course, you could disregard your graphics settings and drop them to their lowest value, but the Naraka: Bladepoint environment artists have done such a wonderful job, it seems a shame not to embrace the glorious backdrop they’ve created for us. But you’ll want to hit that sweet spot with the best settings for Naraka: Bladepoint’s graphics to keep the game playable.

Or all that bunny-hopping and physics-defying grappling will be for naught.

To give you the edge you need, we’ve run a few million benchmarks on our three performance testing rigs, along with a couple of MSI gaming laptops. Hopefully it’ll help you establish how well Naraka: Bladepoint will run on your PC at different resolutions. Prepare to discover your graphical center, and soak the battlefield with the blood of your enemies.

The tests we’ll go into below, but here are our instant takeaways:

These tests were performed in the Free Training area, to eliminate the variation you will likely see in multiplayer mode. Frame rates in the multiplayer arena can vary wildly, especially when you’re surrounded by spell-slinging assailants. Just something to keep in mind.

The following was recorded using unlocked frame rates, at the highest graphics settings, at different resolutions. That’s with DLSS and Reflex off, anti-aliasing set to SMAA, and DirectX 11 on (seeing as that’s the only option for now).

For a baseline reading, I started the tests on our mid-range machine—packing an MSI Nvidia GeForce RTX 3060 Ti Ventus 2x and AMD Ryzen 5 5600X. There’s no denying a hardware combo like this can rip through plenty of games at 1080p, this one included, but graphically intensive multiplayer games like Naraka: Bladepoint become less viable at 1440p, and less than ideal at 4K.

Scraping by at 53 fps could be a problem in a fast paced hack and slash such as this, so if you’re packing something similar in your rig and tip-top graphics are a priority for you, think about sticking to QHD.

Alternatively, you could always build yourself a ridiculous, high-end machine with an MSI Nvidia GeForce RTX 3080 Gaming X Trio and AMD Ryzen 9 5900X combo. That way if you crank the graphics up to full, you’ll be sure to get more-than-acceptable frame rates at any resolution. Our big rig destroyed Naraka: Bladepoint—pushing 168 fps at 1080p, and 85 fps at 4K—though there’s always room for improvement.

Besides, I know it’s not always an option to go for an upgrade, especially in today’s market. But with Naraka: Bladepoint pummeling some older PC configs—even those as recent as our budget rig’s MSI GeForce GTX 1650 Super Gaming X, and Intel Core i5 10400F—you’ll be tempted to do just that. With just 15 fps at 1080p, it was basically unplayable using the highest preset.

When it comes to laptops, you can’t just swap out your GPU for something overpowered, either. And while our high-end MSI Raider GE76, with a mobile RTX 3070, gave up a silky 99 fps, the mainstream MSI Raider GF65, with its GTX 1660 Ti, was stuck creeping along at just 26 fps. And that’s only at each laptop’s native 1080p, too.

For those packing a 16-series equivalent or earlier, I’d recommend taking a look at our settings tweaking suggestions below, so you can get the most out of your current hardware configuration.

Naraka: Bladepoint may be graphically intense, but it’s nothing some small tweaks can’t handle.

When you’re staring down something like 15 fps, it’s tempting to forget graphics tweaking and submit to the lowest preset. But don’t throw in the towel just yet. There are some easy tweaks I’ve found that could double, even quintuple your fps scores, without leaving you in graphical purgatory.