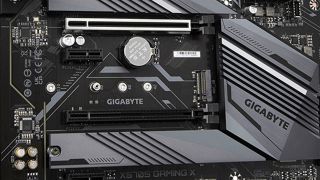 A leaked block diagram that seems to originate from the Gigabyte ransomware attack, appears to show the AMD 600-series motherboard chipset won’t support PCIe 5.0 (via TechPowerUp). This is the chipset that is designed to support Zen 4 processors, expected to release in 2022.

Intel, meanwhile, has confirmed this week at its Architecture Day 2021 that its Alder Lake hybrid processors will support PCI Express 5.0. This will give Intel the lead when it comes to superfast storage and potentially graphics cards too, although the latter is a bit more of a leap.

This is a notable switch from the lead that AMD enjoyed with PCIe 4.0 for almost two years since its Zen 2-powered Ryzen 3000-series landed. Intel only offered support for PCIe 4.0 with its 11th-gen Rocket Lake chips, which launched in March this year.

The main benefit of moving over to PCIe 4.0 has been on the storage front, where the bandwidth doubling over PCIe 3.0 can be utilised. In case you’re wondering, graphics cards have shown no notable benefit running on PCIe 4.0, at least not when it comes to actual games—although there are synthetic tests that show there’s potential there too.

The fastest PCIe 4.0 SSDs have been pushing up against the limits of PCIe 4.0 though, with sequential reads of 7,400MB/s from the likes of the Adata XPG Gammix S70 2TB SSD. The bandwidth doubles again going to PCIe 5.0, which should give SSD manufacturers plenty of room for the increased sequential throughput.

If this turns out to be true, does that mean that AMD will be left behind? Probably not. While Intel may win a few headline battles on the way, the truth is the actual day-to-day performance of the fastest SSDs is still a long way off the limits of PCIe 4.0. Even with Zen 4 not expected to launch until next year, AMD should still be competitive. And that’s taking into account any magic that DirectStorage can bring to the party.

There’s not a lot else of note from the block diagram, other than there are four more PCIe lanes that feed straight to the discreet USB4 controller, and that the rumours about AMD supporting DisplayPort 2.0 seem to be correct. DDR5 support is present and correct too, although there’s no indication of how fast it’s running.

As ever, these are just rumours at this point and plenty could change by the time Zen 4 actually launches. Even so, the benefit of moving over to PCIe 5.0 may not be quite as pressing as the last generational upgrade was. With Alder Lake due to launch before the year’s out though, we could soon find out one way or another.