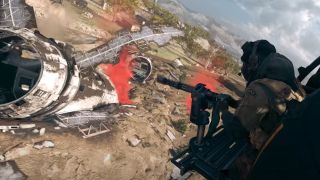 If you’re looking for Warzone uplink stations, well, to be honest, so am I. They’re not the easiest things to find on the refreshed version of Verdansk ’84, but you’ll need to find at least five if you want to complete the new Warzone Ground Fall event challenges. That involves not just finding a crashed satellite on the map, but crashing one. Exciting.

Coming as part of Warzone Season 4, along with new weapons like the Nail Gun and mysterious new features such as the portal-like red doors, uplink stations arrived in the game that, once activated, give you the chance to send a satellite crashing into the ground in return for rewards, such as powerful killstreaks. So where can you find an uplink station and a Warzone satellite location so you can grab your loot? I’m here to help.

In the first few minutes of a match, satellites will start descending on Verdansk. It’s perfectly possible to follow their path from the sky to the ground, but if that isn’t working for you there are a few recurring spots, like in Krovnik Farmland and Gora Bridge. When you see one untouched, interact with it to claim your prize. Naturally there’ll be other players on the hunt for these boons just as you are, so be vigilant.

Uplink Stations are harder to find. They’re small, not marked on the map, and their locations are seemingly random. If common locations emerge, I’ll update this guide. For a visual reference of these little satellite dishes, check out legolee’s video on Reddit below.

You’ll know when you’re near a station because the orange ‘Secure’ icon will pop up on your screen. You’ll start securing the station by standing near it and when you’re one you’ll be notified that a satellite is crashing. It’ll land near the uplink station, but if you miss it plunging loudly from the sky, worry not: it’ll be marked on your map. From there, so long as you survive on your way to the landing zone, claim your treasure by interacting with the newly-crashed satellite.