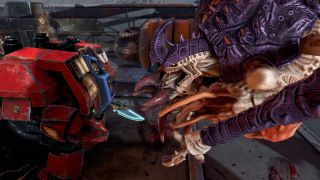 Warhammer 40,000: Battlesector was last month’s addition to the pile of 40K games, a thoroughly decent turn-based tactics game about space marines of the Blood Angels chapter—plus a few allies from the Sister of Battle—taking on the bio-organic alien tyranids. In a new dev diary, Black Lab Games has outlined its immediate plans for Battlesector’s future.

“The most common request we’ve seen is for more units and factions”, Black Lab says. Additional factions were already in the works, as “We always expected this game to grow and evolve over time, and adding factions is a part of that plan.” A couple of other requests the studio is planning to fulfill in a future update are a veterancy system for unit progression, and more involved unit management.

“The Veterancy system will add 1% accuracy and 1% crit chance for each mission a unit survives”, Black Lab explains. “This benefits units that survive, without making them disproportionately more powerful than their initiate brethren.” Meanwhile, a higher difficulty campaign option will limit how many units you can add to your army at once, preventing you from suddenly fielding a force of “oops all tanks” or the like.

“In this system, you’ll be given a number of Requisition Actions when a mission is completed. Each unit you add to your army uses a Requisition Action. Furthermore, most units will have a limit on the number of units that can be requested before each mission, and a cooldown before they can be requested again. For example, Librarians are less common units than Aggressors, so an Aggressor squad has a short cooldown, whereas a new Librarian can only be requested after a few missions.”

In addition to those features, future updates will adjust the graphical options so you can “change or disable shadows, anti-aliasing, ambient occlusion and bloom”, and tweak the v-sync and framerate settings further. Bugfixes are also a priority.

I highlighted the absence of unit progression as one of Battlesector’s only flaws in my review, so while the veterancy system sounds pretty basic it’s better than nothing. And even without it, Battlesector’s campaign is an enjoyable way to spend 20 or 30 hours, worth ranking among the best Warhammer 40,000 games.