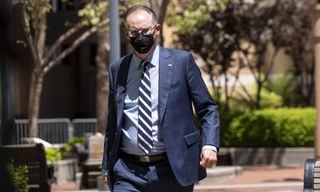 When Epic publicly rejected Apple and Google’s app store terms and hit the “sue them all” button in 2020, it seemed like the fight was just beginning. Apparently, however, the daggers had already been out for a while by then, and were sharp as can be. We learned today that a Google exec went so far as to suggest settling a disagreement with Epic by making a deal with Tencent to wrest control of the company away from founder and CEO Tim Sweeney.

Tencent, the Chinese conglomerate that owns Riot Games and pieces of many other big developers, owns 40% of Epic Games, while Sweeney is the controlling shareholder. According to a court document filed by Epic today, an unnamed Google executive once suggested that if Epic didn’t play nice, Google should talk to Tencent about buying some of its Epic shares “to get more control” of the Fortnite developer, or that it could even work with Tencent to take over Epic entirely.

“Google recognized that Epic might not accept its offer,” reads the document. “‘As a potential alternative’, a senior Google executive proposed that Google ‘consider approaching Tencent’, a company that owns a minority stake in Epic, ‘to either (a) buy Epic shares from Tencent to get more control over Epic’, or ‘(b) join up with Tencent to buy 100% of Epic’.”

The detail comes from a freshly unredacted complaint Epic filed with the Northern California US District Court today. When we reported on the same complaint a couple weeks ago, the bit about Tencent was still blacked out along with other details. That was Google’s preference, but yesterday the court denied the search giant’s request to keep the information sealed, which is why the complete document has now been released to the public.

“It appears, sadly, that Google was indeed contemplating a coordinated, multinational hostile takeover attempt of Epic in response to Fortnite launching outside of Google Play,” Sweeney wrote on Twitter today.

In a statement sent to Protocol, Google called Epic’s lawsuit “baseless” and said that the complaint “mischaracterizes” its business conversations. “Android provides more choices in mobile devices for developers and consumers,” the company said.

Epic’s lawsuit against Google is pretty similar to its Apple lawsuit, which went to trial earlier this year. Epic says that anti-competitive Google actions “force app developers and consumers” to use the Google Play Store, where it takes a cut of sales just like the Apple App Store.

The big difference is that Apple’s App Store is mandatory on iPhones, but for phones running Google’s Android OS, Epic did have the option to release Fortnite off the official Google Play Store, and that’s what it did. Google wasn’t happy about it, though. According to the filing, the company was concerned that the Fortnite launcher—later to become the Epic Games Store—was a “contagion” that would lead to massive losses as apps migrated to Google Play Store alternatives.

Epic presents Google as a schemer that tried to strike a private side deal to keep it from rejecting the Google Play Store, while at the same time tossing around this idea of a Tencent-allied surprise attack. The complaint also states that Google has made similar side deals with other game publishers, including Activision Blizzard, to keep them on the Google Play Store, and describes deals Google made with phone makers to keep them from preinstalling non-Google stores, resulting in “Google exclusivity.”

Epic seeks an injunction that would require Google to cease what Sweeney and company consider anti-competitive actions. As with the Apple case, Epic is framing the suit as a fight for software freedom, saying that Google has broken a promise to maintain “an open, competitive Android ecosystem for all users and industry participants.”

What’s next for Epic v Google is still being sorted out—Google wants it dismissed—and a verdict in the Epic v Apple trial that occurred in May is yet to be announced. We expect to hear from the judge of that case sometime later this year.