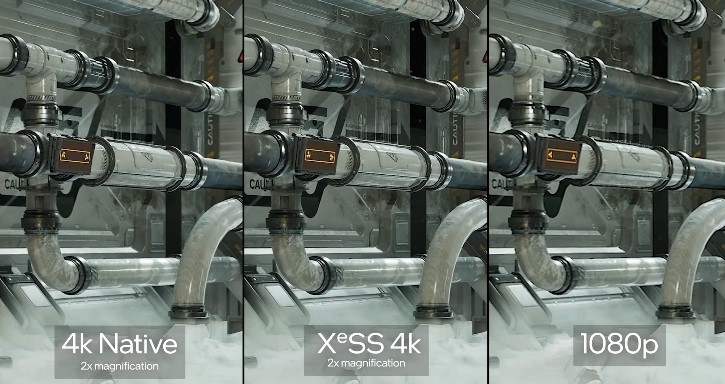 At Intel Architecture Day 2021, we finally got to see Intel’s brand new Ark GPU architecture, also known as Intel Alchemist. We also got the first peek of its impressive AI-accelerated super sampling technology, XeSS, in action for the first time, offering players a new way to boost gaming performance.

Xe Super Sampling (XeSS) is Intel’s open-source answer to Nvidia’s DLSS and AMD’s FSR. One of the most significant differences is that XeSS will work with any GPU, not just Intel’s future Alchemist video cards.

This real-time demo shows XeSS in action by rendering at 1080p and then upscaling it to 4K. Intel even makes side-by-side comparisons between native 4K and XeSS-powered 4K, and it looks pretty much identical.

The goal is to have gamers take games they usually run on low settings and give them a boost in resolution and framerate regardless of whether they’re using an AMD, Nvidia, or Intel video card. It will be interesting to see how this looks in practice when running a game at 1080p and upscaling it to 4K rather than just relying on a tech demo, but Intel has got to start somewhere I guess.

The goal with XeSS, according to Intel, is to give players both high framerates and high resolution without having to make them choose between the two, as you do with other upscaling techniques. Intel is making the bold claim that XeSS will boost performance by nearly double thanks to AI-assisted scaling. It also revealed that the XeSS SDK would be available later this month for developers.

XeSS will be available when Intel’s new Alchemist graphics cards are released in early 2022.