Hot News How to earn Fame in Humankind 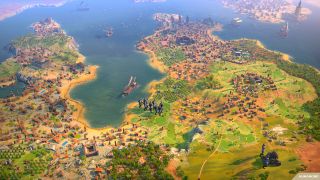 Wondering how to earn Fame in Humankind? One of the unique features in Amplitude’s new 4X is how you actually win a game in Humankind. Sure, you can go for the classic vassal approach, but Humankind features a victory system which revolves around Fame—a currency you earn by, well, showing off.

Fame is accumulated through accomplishing deeds, building epic wonders, and by earning Era Stars for completing challenges related to your cultural affinity. Earn seven of these Era Stars and you get to advance to the next, choosing a new culture, a new affinity, and so continuing your path to greatness.

Era Stars and Fame are a big part of how Humankind lets you personalise your playstyle, constantly shifting and redefining your civilization’s focus either to take advantage of opportunities, or because, hey, sometimes you just feel like pivoting to militarism and crushing your neighbours. With this Humankind Fame guide, you’ll know how to get Fame and win a game in no time.

The main way to earn Fame in Humankind is with Era Stars. This currency is gained by completing goals based around cultural affinity, such as building districts, researching technologies, or producing resources.

There are seven affinities overall, with three progressively harder goals for each. This means that there are 21 stars on offer in each era, though you only need to earn seven to advance to the next. Here are some important things to remember about Era Stars:

It’s impossible to earn every star in an era and not be left lagging behind the other empires. It’s also not in your best interest to do so, considering the amount of Fame that Era Stars reward degrade over time, but reset when you enter a new era.

The best way to earn Fame is to specialise towards the Era Stars related to your affinity, while also completing the easier stages of the ones that are just a natural part of progression and expansion, such as researching technologies, building districts, getting population, destroying units, or gaining territory. If you choose to transcend and keep the same culture in the next era, you also receive an ongoing 10% Fame bonus until you choose your next.

Once a player reaches the Contemporary Era they trigger Humankind’s endgame. If any of these conditions are then met, the game will end, and the player with the most Fame wins:

In Humankind, you can build and discover wonders, either of which grants you Fame. When you stockpile a certain amount of Influence you’ll be prompted to claim an available Cultural Wonder—which can be found in the ‘all cities and outposts’ tab in the top right of your screen. This will show you their potential effect on your city, and the amount of Fame they give.

Once you’ve spent the Influence to claim one, you actually have to build it. Just like religious monuments, wonders are ‘shared projects’ which means that multiple cities can contribute their industry output to help construct them faster. If you’re also the first player to finish a wonder, you’ll get a little bonus Fame for completing the associated deed.

Even though the wonder list refreshes for each era, they are usually claimed pretty early on, especially in games with a lot of players. However, they are a great way of earning Fame, since they also often fulfil deeds when you build them.

This is why Humankind’s natural wonders are the best. All you have to do is discover them through exploration, and you’ll earn a bit of Fame for completing their associated deed.

Just as wonders are part of a collective pool shared by all players, so too are deeds. These world-based challenges range from vassalising another empire to researching specific technologies. They aren’t usually worth much Fame, but considering you’ll probably do a lot of them in the course of a game anyway, they can offer a tidy little bonus.

Here’s a sneaky tip for completing deeds related to discovering wonders: If you share your map view with a bigger faction, anything they discover counts as your discovery, too. This means that you’ll be rewarded with the Fame for completing that deed as well, even though you were potentially thousands of miles away at the time.

Humankind makes it hard to wipe out opponents, but that doesn’t stop you from taking 99% of their territory. I mean, they can’t earn Fame without an empire, right?

Related Post "Hot News How to earn Fame in Humankind"