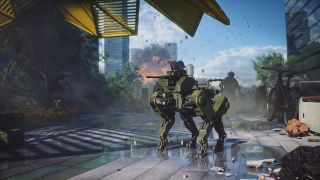 A Battlefield dataminer has uncovered details about Battlefield 2042‘s Hazard Zone mode, and it’s looking a lot like Escape From Tarkov.

Well-known dataminer temporyal revealed a few basic details of the mode on Twitter. We’ve known about Hazard Zone’s existence for a while, but not much else aside from the fact that it’s one of three game modes that’ll be available when Battlefield 2042 launches.

Tempoyral likened Hazard Zone to Escape From Tarkov and Hunt: Showdown, two games that feel a bit like the next evolutionary leap from current multiplayer shooters and battle royales. No other games have really attempted to replicate their styles yet, but Battlefield 2042 seems to be giving it a decent go.

There’s not a whole lot to go on yet, though the data gathered suggests players will be collecting intel from various data drives and crashed satellites once they’ve been dropped into the map. Tactical upgrades will be available to aid with issues like losing your equipment, plus ones presumably for general exploration and fighting.

It’ll also include some points of interest, like ammo stations and areas where you can call for a cool ass robot dog or ATV. Some PvE incidents will be dotted around the map too, with AI soldiers patrolling with the help of tanks or helicopters. Tempoyral said they may be able to call in reinforcements, with additional AI bosses who might be there for extra rewards and objectives.

All of this will also make use of Battlefield’s existing maps, with no suggestions of an ‘dedicated’ Hazard Zones map. Battlefield 2042’s Orbital map will have built-in support for the mode, presumably with others following suit.

Battlefield 2042 just wrapped up a round of limited playtesting last week ahead of its upcoming open beta in September. Not everyone behaved in accordance with EA’s strict NDA though, which led to the European community manager taking to Twitter to warn rule-breaking players that they could be banned from the game when it releases on October 22.