Hot News Which class to choose in Bless Unleashed 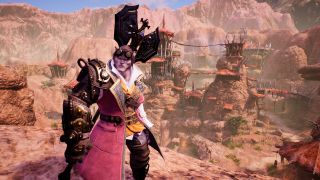 Looking for the best Bless Unleashed class? It’s important to choose a playstyle you’ll enjoy as you quest your way through the story to reach max level. And as Round8 Studio’s MMORPG emphasises action combat, it’s especially important to pick a class with which you’re comfortable.

Bless Unleashed is a free-to-play MMORPG that has just released on PC, though it’s been around on console for a while now. It also might be easy to confuse Bless Unleashed with Bless Online, an MMORPG that was around briefly a few years ago. But aside from Unleashed being set in the same universe and using the latter game’s assets, it’s a very different experience.

So if you’re keen to jump in but are unsure which Bless Unleashed class to choose, this guide should help narrow down your options.

There are five classes to choose from, and each has a unique feel. You’re given a brief tutorial that introduces you to movement and basic class skills when you start playing. The game also throws you up against a boss-type enemy to help give you an idea of how it will perform in a prolonged fight.

While each class has its own unique abilities assigned to specific keys, your basic attacks—bound to left and right mouse buttons by default—can trigger different combo attacks, depending on the order you press them.

You can customise each class with different skills and abilities, so you can work around your preferred playstyle and the abilities that you find the most fun to use.

You can find the basics of each Bless Unleashed class listed below, their early skills to give you a taste of how they play, along with our impressions of each.

This axe-wielding class seems relatively slow, but there’s quite a bit of satisfaction to be had from how powerful and intuitive it feels in the tutorial. You get access to a leap that lets you close in on enemies and knock them down. And no Berserker would be complete without the trademark whirlwind, axe-spinning attack, allowing you to deal damage to multiple enemies. The only real downside—aside from its slowness—is the same as with any melee class: you’ll need to make sure you’re ready to dodge any big incoming attacks to survive.

Seize (Available at level 1)
Use your axe to hook enemies to damage them. This skill does not break combos even when it is used during a combo.

Whirlwind (Available at level 4)
Spin your axe around you as you move, repeatedly damaging nearby enemies. Lasts up to 4 seconds or until you release the attack.

Relentless Cleave (Available at level 7)
Gather your strength to unleash a series of crushing overhead blows as you advance through your enemies. The longer you charge this skill, the more attacks you will perform.

I generally prefer to play ranged classes, and I immediately fell in love with the mage. It feels seriously strong, and even when enemies close in, you have skills that can knock them back or slow them. If all else fails, you can teleport or dodge out of the way, but they’re likely to be dead before they get anywhere near you. The casting feels quick, and you don’t feel rooted in place, though there are some longer casts that can deal considerable damage if positioned correctly.

Arcane Flash (Available at level 1)
Amplify arcane energy and unleash it as a wide beam in front of you, damaging and knocking back affected enemies. This attack leads to a follow-up attack if used again within three seconds.

Frost Spike (Available at level 2)
Summon a Frost Spike that erupts from the ground beneath a single target. Cast again within three seconds to ignore the cooldown, up to three consecutive casts.