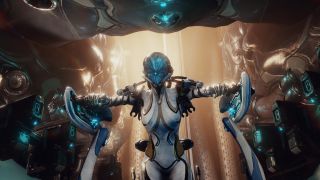 Digital Extremes’ Warframe is a live service game which makes money largely through cosmetics, and part of its success has come from the studio’s willingness to embrace all forms of fan expression, whether that’s guides or incredible 3D art. In 2015, it started a program called TennoGen, where artists can submit cosmetic designs for consideration to be included in the game. If the work makes it, the artist gets a 30% cut of sales.

Similar programs have been criticized alongside the practice of soliciting ‘spec’ work in creative industries, which is when work from artists is requested by a company but only paid for if it’s used. For creators who find success with revenue sharing programs like TennoGen, though, being an independent videogame item designer can result in a life-changing amount of money. Lendel Farjado, who goes by the handle LED2012 online, is one of those creators.

Farjado, who lives in the Philippines with his parents and siblings, spoke to PC Gamer via DM. “I started doing this since the very first round, announced Nov 2015, but on my first try, I didn’t get in. I was familiar with paid stuff from Dota 2 Steam Workshop before and there were some internet conversations about it being lucrative so I didn’t [give] up, reworked and focused on one of my items and eventually got picked on the second round.”

Farjado had no formal training in the field of 3D art, but he had a hunger to learn.

“After my first, I wanted to do more so I kept trying,” he writes. “I have no educational background on 3D art, nothing, I just started reading and watching some tutorials on the processes in making 3D assets. I kept trying but I couldn’t seem to handle how to properly design helmets and full skins so I focused more on Syandanas [the capes that Warframes wear], with my second item the Maharliqa, kinda inspired by the Philippine flag.”

Farjado wasn’t a complete neophyte: He dropped out of college while studying front and backend web design, and it was there he was introduced to free open source 3D modelling software Blender, and learned that it’s possible to create professional 3D art without investing in the expensive software many big game studios use.

Once he started getting some Warframe cosmetics into the game, Farjado used the money to upgrade his PC “from some ancient desktop” that barely ran Blender to a “decent laptop that can handle some games and 3D work.”

Farjado and his family were “running out of money” at the time, he says, with his mom, a nurse, providing for him and three other siblings. “I had to make a move,” he writes, and before he stopped going to college, he started taking small design and motion graphics jobs. Ultimately, though, it would be Warframe cosmetics that allowed Farjado to upgrade more than his PC.

As one example, Farjado says that his Warframe item sales funded his sister’s degree in medical technology, which she completed last year.

Success didn’t come right away, though. Many of Farjado’s earlier Warframe submissions were rejected.

“I think I’ve already set some of [my older work] to private,” he writes, referencing the art shown below. “Some are really just put together for the sake of submitting, I was so bad at designing stuff.”

What Farjado found made the difference was two things: collaborators, and feedback from Digital Extremes. Below is an example of some of his more recent work.

The Raiji Syandana item “was inspired by the backpiece of Raijin, the Japanese thunder god,” Farjado say, and sold well after small changes based on feedback from the Digital Extremes art team. Cryona Syandana was also accepted following feedback.

After that, Farjado started seeking out collaborators. The Limbo skin below (with the top hat) was made with artist Hydroxate.

Due Volpi, below, was conceptualized by Volkovyi/Liger Inuzuka, who now works directly with Digital Extremes making “beautiful deluxe skins,” says Farjado, so they’re no longer able to collaborate.